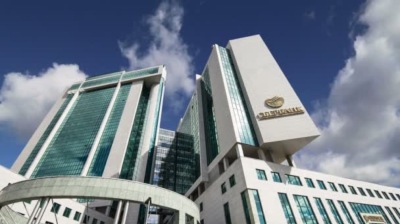 Russia’s banking sector remains profitable and healthy, but corporate lending is sluggish as big companies are unwilling to borrow, while the regulator is stamping on the fast growth of retail loans over the first ten months of this year Fitch Ratings said in a report. / wiki
By Ben Aris in Berlin December 16, 2019

Russia’s banking sector remains profitable and healthy, but corporate lending is sluggish as big companies are unwilling to borrow, while the regulator is stamping on the fast growth of retail loans over the first ten months of this year Fitch Ratings said in a report.

Corporate lending in Russia remains very sluggish as the big companies don't want to borrow and corporate lending remains more or less flat. Russia’s corporate loans nominally increased by RUB204bn (0.5%) in October, but by a higher RUB288bn (0.7%) after adjusting for 1% ruble appreciation against the US dollar.

Over 10M19, corporate lending grew about 4% net of exchange-rate effects and excluding January changes from the implementation of IFRS9-like rules.

“The main reason for sluggish corporate lending is a lack of demand from quality borrowers, and banks' still greater appetite for retail lending. Most lenders are not constrained by capital or liquidity,” Fitch said in a report.

The Central Bank of Russia (CBR) has been worried by the ballooning retail borrowing and has moved to cool the business. Retail lending growth decelerated in October, growing by RUB123bn, or 0.7%, compared with RUB256bn (1.5%) in September.

“We attribute this moderation partly to new regulation that became effective from October 1, which involves higher risk-weights on loans to leveraged borrowers, but also to banks' higher growth appetite for a few months prior to the regulation tightening,” Fitch said.

“Excluding January changes from implementation of IFRS9-like rules, retail loans grew by 15% in 10M19, and this may reach 17% for the whole year, while for 2020 we forecast a slight slowdown to about 15%,” Fitch reports.

Banks continue to mainly rely on the customers’ deposits for funding. Deposits (excluding state entities' deposits) nominally increased by RUB109bn (0.2%) in October, but net of currency movements by a higher RUB243bn (0.4%), Fitch reported.

Funding from state entities increased by RUB109bn, or 1%, in October and by RUB2.7 trillion (33%) from the beginning of the year, reaching RUB8.6 trillion (excluding the CBR RUB0.5 trillion subordinated debt provided to Sberbank and RUB1.8 trillion of deposits at the CBR-owned bad bank) or 11% of sector liabilities at end-October.

Some banks that are large borrowers from the Ministry of Finance (RUB1.7 trillion total sector increase in 10M19) and regional/federal budgets (RUB0.7 trillion) are also placing deposits with the CBR or buying its bonds, suggesting there may be opportunities for arbitrage.

Total liquidity in interest-bearing deposits with the CBR, and banks' investments in short-term CBR notes were about RUB2.5 trillion at end-October, or about 3% of sector assets, down from RUB3.1 trillion at end-September.

Ruble interest rates decreased by 35bp-45bp in October judging by Mosprime rates for one week to six months, which was due to generally healthy liquidity and the CBR's key rate cuts of 25bp in September and a further 50bp to 6.5% in late October.

“Although interest rates are declining, we do not expect significant margin pressure in the near term, as loan and deposit rates are largely falling in tandem and the share of higher-margin retail business is gradually increasing,” Fitch said.

The sector reported a RUB173bn net profit in October (annualised return on average equity (ROAE) of 23%), while excluding the result of the 'bad bank' (which has negative equity of RUB1.5 trillion) it was RUB166bn (19%). Sberbank earned RUB74bn (annualised ROAE of 21%, accounting for 45% of adjusted sector profit). Good profits were also reported by VTB (RUB23bn, 20% annualised ROAE) and FC Otkritie (RUB11bn, 35%).

“We estimate the total negative effect of IFRS9-like rules implementation in 2019 for the sector was about RUB0.8 trillion (equal to 10% of sector CET1 capital, excluding the bad bank). However, these adjustments are not yet reflected in capital ratio calculations,” Fitch reports. “It is unclear when and if the CBR may require banks to reflect these adjustments in regulatory capital, but we estimate that sector average capital ratios would be 90bp-110bp lower if these adjustments were recognised, albeit this would vary significantly among banks.”

Banking groups need to comply with capital buffers on a consolidated basis at the end of each quarter. Excluding Promsvyaz, which has not yet disclosed consolidated capital ratios, all systemically-important banks (SIBs) complied at end-3Q19.

At end-3Q19 nine SIBs already had consolidated capital ratios above the fully-loaded requirements of 8% for core Tier 1, 9.5% for Tier 1 and 11.5% for total capital that will be in force from end-1Q20.

“VTB will need to improve its consolidated total capital ratio (11.2% at end-3Q19), which it could achieve by profit retention, while Russian Agricultural had only a modest cushion on its Tier 1 ratio (9.7%) and Gazprombank on its Core Tier 1 ratio (8.1%),” Fitch said. “Non-SIBs need to achieve fully-loaded consolidated requirements from end-1Q20 of 7%, 8.5% and 10.5%, respectively. Of the non-SIBs covered in the report, UBRIR, Orient Express, Absolut Bank and MTS-Bank had tighter capital ratios.”

MTS-Bank met buffer requirements on a consolidated basis at end-3Q19, and had ratios minimally above the fully-loaded requirements expected from 1Q20, but its capitalisation should be strengthened by a new contribution of RUB3.5bn of equity and RUB1.5bn of perpetual subordinated debt (both already registered by the CBR in November), Fitch reports.

Orient Express improved its core Tier 1 ratio above the 5.125% trigger for the write-off of its perpetual subordinated debt in September and further to a more comfortable 5.9% in October. This improvement was achieved largely thanks to RUB2.8bn net profit of an uncertain nature (annualised ROAE more than 70%) the bank recognised in September-October. However, its Core Tier 1 and total capital ratios were still below requirements including buffers, which the bank needs to comply with at end-2019.

UBRIR's and Absolut-bank's consolidated Tier 1 ratios were a low 2% and 4.9%, respectively, at end-3Q19, below requirements excluding buffers. However, this was largely due to the rehabilitation of acquired and previously failed banks (VUZ-Bank and Baltinvestbank, respectively). Non-compliance with consolidated minimum ratios was agreed with the CBR, while the banks' standalone ratios were above the minimum requirements at end-10M19.

UN special rapporteur issues damning indictment on human cost of sanctions in Iran
NEMETHY: Where are US markets? Where are they heading?
EU opens loophole for Russian gas-for-rubles scheme