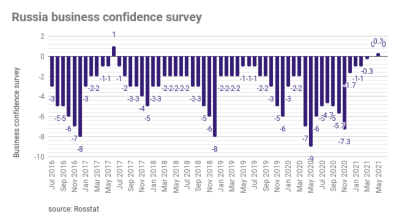 Russia's business confidence is at its highest level in eight years, while consumer confidence is improving but still running behind the historical average.
By bne IntelliNews July 1, 2021

Russia’s business confidence remained at highs not seen since 2012 in June, while consumer confidence is starting to improve but remains behind the historical average for the summer season, according to latest RosStat survey.

The consumer confidence index, which reflects the aggregate consumer expectations of the population, increased by 3 percentage points in the second quarter of 2021 compared to the first quarter of 2021, amounting to -18%, as sentiment slowly improves amongst the population on the back of the economic recovery.

Business confidence is already at its highest level in eight years and in positive territory for only the second time ever. Business confidence improved from zero in April to 0.3 in May – the first time it has broken into positive numbers since 2012. However, in June the index fell back to zero again as concerns about surging inflation have dampened the mood somewhat.

The level of pessimism amongst Russia’s business community has fallen to an all-time low of 4%, according to a study released by consultant Deloitte, RBC reported on June 11. The result was the lowest result since the surveys were begun in 2015. Among the 76 CFOs of large and medium-sized businesses surveyed, over half (56%) were optimistic about the financial prospects of their companies, the report found. “We can say that representatives of Russian business are confident that the crisis caused by COVID-19 has been overcome,” the study says.

This article is from bne IntelliNews Russia monthly country report. Sign up to receive the report to your inbox each month, which covers the slow moving macro- and micro-economic trends, the major political news and a round-up of the main sectors and corporate news. First month is free and you can unsubscribe at any time.

The Russian physicist and election statistics expert Sergey Shpilkin released another two charts on the voting patterns in the recent Duma elections that show a “comet effect” and a “Moscow blob”.

Corporate lending gained momentum thanks to the COVID-19 support package, but as subsidies are phased out and economic activity returns to normal, retail lending is gradually returning as the driving force behind overall bank lending.