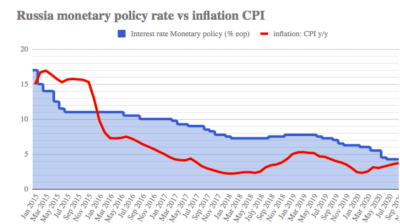 The board of the Central Bank of Russia (CBR) resolved to keep the key interest rate unchanged at 4.25% at the first policy meeting of 2021 held on February 12. This makes it the fourth time in a row that the CBR has kept the rate flat since September 2020, after a cutting cycle of 2 percentage points last year.

The CBR has expectedly defied the recommendations of the International Monetary Fund (IMF) that earlier this week suggested that the CBR had room to cut 50bp off interest rates to boost growth in the coming months despite surging inflation.

Instead, as anticipated by domestic analysts, the regulator remained focused on inflationary risks, maintained the rate flat and has walked back its previous guidance on the horizon of the monetary easing cycle.

As reported by bne IntelliNews, inflation in Russia breached the 4% target of the central bank at 4.9% for 2020 and remained elevated at over 5% in January, prompting the government to put price caps on certain food categories.

In an accompanying statement the CBR indeed noted that disinflationary risks are no longer dominant over the 12-month horizon, while the inflation forecast for 2021 is revised upwards to 3.7%-4.2%. Food prices remained elevated in January, while global vaccination efforts and expectations of fiscal stimulus in some countries had pushed the prices on the financial markets up, the CBR commented.

The analysts at Sovcombank noted on February 12 that the CBR has maintained the key rate below the neutral range of 5-6%. Previously the CBR head Elvira Nabuillina guided that a return to the neutral monetary policy would be possible in 2022.

In the latest press release, the CBR commented that it will still determine the dates and the pace of return to the neutral monetary policy. The end of the monetary easing cycle was confirmed by the Governor of the CBR Elvira Nabuillina, who said at a press conference on February 12 that there was no more space for further interest rate cuts, but that the policy is likely to remain neutral throughout 2021.

"Although CBR’s rhetoric has become more hawkish, we think that monetary authorities might keep the key rate on hold through 2021, with the first rate hikes only coming in 1H22," Sova Capital commented on February 12.

Sova Capital believes it is "too early to discuss rate hikes, while the surge in the number of COVID-19 cases in September 2020-January 2021 could have a serious effect on the labour force."

This, in turn, could mean a more gradual recovery versus CBR’s expectations of 3-4% year-on-year growth in 2021 (Sova forecasts GDP growth of 2.8% y/y). "At the same time, a milder-than-expected fiscal consolidation could support the recovery in growth," Sova analysts note, while expecting the first rate hikes coming in 1H22.

Sovcombank analysts believe, however, that should inflationary pressures persist, and the ruble be subject to another round of geopolitical pressure, the CBR could push the key rate to 5% in 2021 instead.

Previously Renaissance Capital analysts maintained the call on the earlier start of the CBR’s policy normalisation cycle in mid-2021, but after the meeting RenCap analyst Sofya Donets suggested that first 25bp key interest rate hike could come in June 2021, with possible increase to 5.5% by the end of the year.