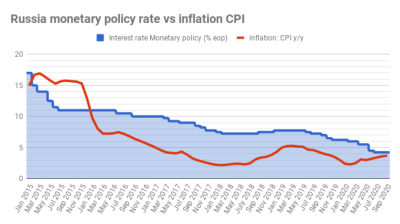 The board of the Central Bank of Russia (CBR) at the second last policy meeting of 2020 on October 23 resolved to keep the key interest rate unchanged at 4.25%, in line with expectations.

As reported by bne IntelliNews, the CBR kept the key interest rate flat at 4.25% in its policy meeting of September 18. Inflation remains in check, and the bank struck a conservative note due to rising geopolitical risks. Mounting fears of an impact from a second wave of coronavirus (COVID-19) are also likely to keep the rate flat.

The CBR maintained its guidance on the key rate, as it has in its past several meetings, noting “the necessity of a further key rate reduction at its upcoming meetings”.

The CBR expects the short-term risks to remain predominantly inflationary, as they are tied to the volatility of global financial markets, geopolitical risks and temporary disruptions in supply chains.

The central bank now forecasts a lower contraction of 4-5% year on year in 2020 (versus 4.5-5.5% y/y in July) and a less pronounced recovery in 2021-22 (2.5-3.5% y/y and 2-3% y/y respectively). The fiscal consolidation, COVID-19 outbreak and slower-than-expected resumption of consumer and producer activity could weigh on any further bouncing, the CBR commented.

"We believe the risk of domestic turmoil on the back of a second wave of lockdowns (disinflationary risks) in tandem with a global downturn, geopolitical risks and inflationary pressures and expectations could keep [the] CBR from realising its rate-cutting potential in December," Sova Capital commented on October 23.

Mid-term disinflationary risks open the door for a shift in policy rates to persistently lower levels in 2021-22, Nabiullina said.

"The CBR’s decision was expected: since the CBR’s last meeting in September, Russia, along with the world, has been hit by a new wave of COVID," chief economist of BCS Global Markets Vladimir Tikhomirov wrote on October 26, noting that the latest data shows that these changes were accompanied by a steady rise in inflationary pressures.

"If one adds to that the worsening geopolitical environment and high levels of uncertainty surrounding the US’ post-election outlook, the CBR’s decision is hardly surprising," Tikhomirov believes.

The next CBR meeting is scheduled for December 18, by which time BCS GM hopes to have more clarity in two key aspects – the US election campaign results and more certainty as to the scope and depth of the second COVID wave.

"Consensus believes that these changes will allow the CBR to deliver one more 25bp rate cut in December, probably the last one,"  Tikhomirov wrote, while disagreeing and maintaining the view that CBR completed its easing cycle in July 2020 and that its key rate will remain unchanged at least until mid-2021, perhaps longer.

Worst figure for 25 years weakens forint and piles more more pressure on the central bank to keep putting up rates.

Inflation expected to reach 13.9% in December as war in Ukraine keeps fuelling supply-side issues in some key commodity markets.

At the end of July, 240,706 Czechs were seeking employment. This figure is 9,397 more people than the previous month, translating into a rise of 0.2%.

Poll shows every other Russian supports continuing the war against Ukraine
1 hour ago
Hungarian inflation surges to 13.7% y/y in July
4 hours ago
Romania revises inflation outlook upwards on supply-side issues
4 hours ago
Dollarisation in Turkey smashing records
23 hours ago
Unemployment slightly rose in Czechia in July
1 day ago