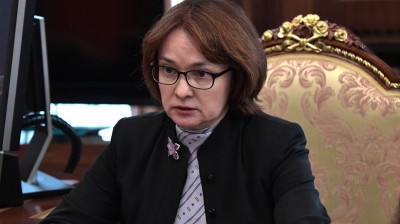 The board of the Central Bank of Russia (CBR) resolved to cut the key interest rate by 25 basis points (bp) to 4.25% at the policy meeting of July 24.

The decision was unexpected – as reported by bne IntelliNews, the consensus expectation was that the CBR would make a bold cut of 50bp, after slashing the rate by 100bp at the previous meeting in the ongoing monetary easing cycle.

The expectations were underpinned by inflation trending safely below the 4% target and the post-lockdown recovery proceeding less quickly than expected, in need of additional stimulus.

The Bank of America (BofA) believed that Nabiullina's guidance for inflation undershooting the 4% target was alone enough to further cut the interest rate by 0.5pp. However, the BofA still believed that the CBR could hold the rate at 4% or above and re-focus on inflationary risks amid an expected recovery in 2021.

Renaissance Capital also anticipated the rate would be cut by 0.5pp, while believing that CBR will sit one out at September's meeting to watch the pace of consumer demand recovery. The current easing cycle could come to an end in July, but in the case of a second wave of the coronavirus (COVID-19) pandemic, the key interest rate could be lowered again to 3.5%.

But some analysts believed that arguments for a slower rate cut of 0.25pp are stronger. VTB Capital (VTBC) argues that CBR could start moving more cautiously to avoid volatile policy corrections in the future, and give more careful and gradual signals to the monetary market.

The recent macro data is also too uncertain for a bold interest rate move, VTBC noted, reminding that while business confidence and transfer statistics improved, the industry and consumer segments were still weak in June.

Alfa Bank's Natalia Orlova also expected a 0.25pp cut, noting that some signs of recovery were coupled with a record-high plunge in disposable income in 2Q20.

"It is possible that there is more space for further monetary easing, but whether we will use it will depend on the economic situation," the Governor of the CBR Elvira Nabiullina said at a press conference on July 24 as cited by Reuters. She also said that the regulator is likely to get back to standard 25bp interest rate movements.

The CBR maintained a mild rhetoric, RenCap commented after the meeting, leaving space for another cut of 25bp later in 2020, as planned foreign currency sales towards the end of the year should support the ruble and allow for a comfortable rate cut.

Despite the mixed signals, RenCap analysts believe that CBR is becoming more optimistic about the economic recovery outlook and is likely to end the monetary easing cycle at 4% as of the end of 2020 and raise the rate back to 5.5% at the end of 2021. However, in the case of a severe second wave of the COVID-19 pandemic, the rate could be cut to 3.5%, RenCap argues.

Analysts surveyed by Reuters also believe that the CBR will end the current easing cycle at 3.75%-4% in 2020.

The CBR was also widely expected by the analysts to redefine the target neutral interest rate range (currently at 4.5% plus 2-3pp, thus at about 6-7.5%). Nabiullina confirmed that the new range is at 5-6%.