Russia’s Composite PMI up further in May, but still in contraction 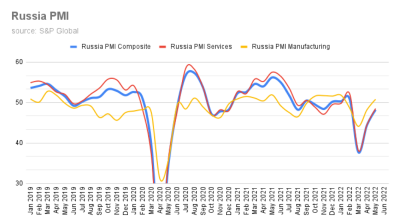 The S&P Global Russia Composite PMI Output Index (manufacturing and services) posted 48.2 in May 2022, up from 44.4 in April and 37.7 in March, but still in contraction territory below the 50-point threshold, to signal a further, albeit slower, decline in Russian private sector output.

As followed by bne IntelliNews, the manufacturing PMI alone was back in positive territory in May posting an expansion of 50.8, up from 48.2 in April despite the war shocks.

Overall, despite Russian GDP slipping into recession in April, the analysts started to cautiously improve their outlooks on 2022, but others warned that deeper shocks are still to come from the EU’s sixth sanction package.

On the services side, the seasonally adjusted S&P Global Russia Services PMI Business Activity Index registered 48.5 in May, up from 44.5 in April, remaining in the negative territory.

“The latest index reading signalled a modest contraction in business activity across the Russian service sector that was the slowest since February. Still, firms once again noted weak client demand stemming from economic sanctions and the impact of inflation on customer spending,” the report commented.

The fall in services output reflected weak domestic and foreign demand conditions, with total inflows of new work and new export business decreasing sharply. However, despite the service firms cutting their workforce numbers as the level of incomplete business declined at the fastest pace in over two years, business confidence inched up “amid hopes of an improvement in domestic economic conditions over the coming year”.

Cost burdens continued to increase for the service providers in May, with the rate of input price inflation being among the steepest in over 20 years. The service firms attributed higher costs to greater fuel and imported input prices, as well as wage pressures.

CPI inflation in Moldova hits 33.6% y/y in July
12 hours ago
How do high gas prices push up the cost of power?
20 hours ago
Russian inflation falls to 15.1% in July
21 hours ago
Russia’s current account surplus hits new all-time high of $166bn
1 day ago
Poll shows every other Russian supports continuing the war against Ukraine
1 day ago