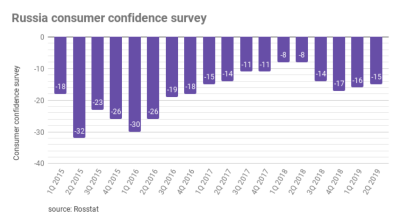 Russia’s consumer confidence index ticked up by 1 percentage point in the second quarter to -15%.
By bne IntelliNews July 9, 2019

The share of people who think that the recent economic changes are positive rose to 12% in April-June from 11% in January-March, while those that think they are negative fell to 42% from 45%. The share of people that believe there has been no change rose to 46% from 43%.

The number of people who expect economic improvements in the next 12 months fell to 15% from 16%, while the share of people that see negative dynamics in the Russian economy decreased to 29% from 33%.

The Russian consumer is depressed after six years of real income stagnation, which is feeding through into depressed retail turnover figures. What consumption growth there is has been driven by growing retail borrowing that is expanding by 25% a year, causing the Central Bank of Russia (CBR) to fret about a growing consumer credit bubble.

The consumer confidence results stand in stark contrast to the business confidence survey, where there has been a much more pronounced increase in confidence.

From a low of -8% in December at the end of a decidedly nervous autumn, business confidence rapidly improved in January, jumping to -25, and then ticked up again to -1% in May.

The improved confidence survey numbers are a comment by businesspeople on their own business, but they also remain depressed in that private corporate investment remains very depressed. Businesspeople have got their businesses to the point where they are making money, but they are not confident enough about the future to want to invest into growth.

This article is from bne IntelliN 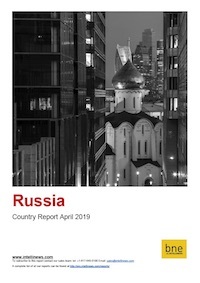 ews Russia monthly country report. Sign up to receive the report to your inbox each month, covering the slow moving macro- and micro-economic trends, the major political news and a roundup of the main sectors and corporate news. First month is free and you can unsubscribe at any time.

Russian vote through changes to constitution in referendum, Putin cleared to rule until 2036
Russian corporate profits recovering, but still down by half on 2019 in April
Russian petrochemical giant Sibur raises $500m in 5-year eurobonds with a record-low 2.95% coupon

Polish PMI advances but remains below 50 points as restrictions lifted
18 hours ago
Czech PMI slightly up in June but still under 50-point threshold
21 hours ago
Russian corporate profits recovering, but still down by half on 2019 in April
1 day ago
Real wages in Ukraine increased 1.4% y/y in May, after sliding 0.6% y/y in April
1 day ago
June PMI shows Turkish manufacturing back on expansion path
22 hours ago