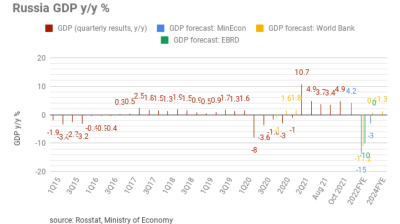 The fall of the Ukrainian economy will be even more dramatic and is projected to contract by 45.1% in 2022, the World Bank forecast.

The GDP of Eastern Europe as a whole will decrease by 30.7% due to the Russian military operation in Ukraine and disruptions in trade. GDP in Europe and Central Asia may fall by 4.1%.

The EBRD’s 2022 growth projection across the EBRD regions, which include emerging Europe and some Southern and Eastern Mediterranean economies, has been revised downwards by 2.5 percentage points (pp) to 1.7%, the EBRD announced on March 31.

Russia’s economy is projected to contract by 10%, a 13pp downward revision, according to the EBRD, and zero growth in 2023.

“Initially it was believed that the robust situation of the Russian economy, arising thanks to the fiscal fortress policy settings of the past few years, would mean the economy would be well placed to withstand the short-term impact of economic sanctions … However, as the severity of the sanctions imposed increases on an almost daily basis, it is clear that the economy will be hit hard,” said the EBRD report. “Sanctions on energy exports and the exclusion of banks from SWIFT have gone from being considered beyond the pale, due to the associated collateral damage, to a reality.”

A March poll of economists by the Central Bank of Russia (CBR) predicted an 8% fall in GDP. The regulator believes that the trajectory of economic recovery will depend on the degree and speed of adaptation to new conditions.

The World Bank notes that more than half of the enterprises in Ukraine are closed, and the rest are working with lower productivity. Grain exports decreased by almost 90%, total exports fell by half. The fall in GDP will depend on the duration of hostilities.

One of the major hits to the economy is the inability of Ukraine’s ports to function. The port city of Mariupol has been a focus of the war and has been subjected to heavy bombardment. Most of the city is now under Russian control, with Ukrainian defenders making a stand at the giant steelworks of Azovstal. The port of Odesa is still in Ukrainian hands, but Russia’s navy have blockaded the port, making it impossible for ships to get in and out. The naval blockade will prevent Ukraine from exporting its grain, one of the country’s major foreign exchange earners.

“The war is having a devastating impact on human life and causing economic destruction in both countries, and will lead to significant economic losses in the Europe and Central Asia region and the rest of the world,” the World Bank said in its forecast published on Sunday, 10 April.

According to the EBRD, at present the war is happening on territories that produce around 60% of Ukrainian GDP. It cites a National Bank of Ukraine (NBU) estimate that 30% of businesses have stopped production and electricity consumption has dropped to around 60% of the pre-war level. In turn, says the EBRD, “This is severely weakening companies’ finances, with some being even physically damaged, thus exposing the banking sector to a drastic deterioration of asset quality.”

Belarus, which has been included in western sanctions, is expected to see a more modest contraction of a 3.2 pp downward revision, according to the EBRD.

The only economies to escape negative consequences from the war in Ukraine are two Eurasian oil and gas producers, Azerbaijan and Turkmenistan, whose forecasts for the year were raised by the EBRD.

The World Bank said the war in Ukraine is a second major shock in two years, after the pandemic, and will lead to a 4.1% decline in economic output across the region – twice as steep as the recession in 2020 from the coronavirus (COVID-19) crisis.

The World Bank and International Monetary Fund (IMF) are due to have their annual meeting of finance ministers and central bank governors this week in Washington.

MEDUZA: Ukrainian strikes on targets inside Russia could mark a new phase in the war
Russian coal exports hit fresh highs after EU shipping sanctions were softened
bneGREEN: Vertical farms to feed the cities of the future