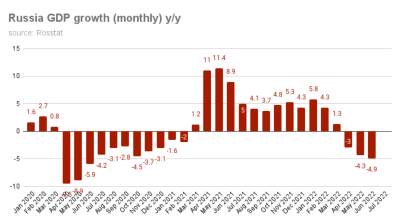 Russia’s GDP down 4.9% y/y in June, but less than expected. Russia's economy is expected to contract by about 6% this year. / bne IntelliNews
By bne IntelliNews July 29, 2022

Russia’s GDP contracted by 4.9% year on year in June 2022, according to the data from the Ministry of Economic Development.

As followed by bne IntelliNews, GDP forecasts for Russia hit by Western sanctions following the military invasion of Ukraine have recently improved across the board. This week the International Monetary Fund (IMF) said Russia’s economy is doing better than expected, upgrading its forecast for the contraction expected this year to -6% from -8%.

However, despite the optimistic outlook revisions, as compared to May’s -4.3%, in June the GDP decline slightly accelerated. For 2Q22 overall GDP contracted by 4%.

BCS Global Markets warned that “released macro data still reflects the fragility of the current economic situation and for now, cannot be viewed as an indication of low damage to the economy.”

The analysts note that a closer look at the numbers “reflects still uneven transformation among Russian industries”.

The industrial output data for June suggests that some moderation in economic contraction was driven by a 2.3% y/y growth in the extraction and mining sector, following a circa 1% decline in May, as well as a still sustainable 2.1% y/y growth in agriculture.

At the same time, the contraction in manufacturing accelerated in June to 4.5% y/y vs 3.2% y/y in May, BCS GM analysts warned. Construction that previously was the key growth driver in April-May fell flat with only 0.1% y/y growth. Also, export-oriented and import-dependent industries, such as chemical production and the automotive industry remain the hardest hit by sanctions pressure.

“In general, the trend in the real economy reinforces the dependence of the Russian economy on commodities – it makes the growth prospects more dependent on state projects and also implies that the headline figure is becoming less indicative to interpret the recovery process in the economy,” BCS GM concluded.

Romania’s public debt hits 50% of GDP at end-May
14 hours ago
Hungary's automotive industry continues to rebound in June
1 day ago
Russian GDP contracted by 4% y/y in the second quarter of 2022
1 day ago
Serbia’s annual inflation accelerates further to 12.8% in July
2 days ago
Poland’s CPI growth rate picks up just 0.1pp to 15.6% y/y in July
4 days ago