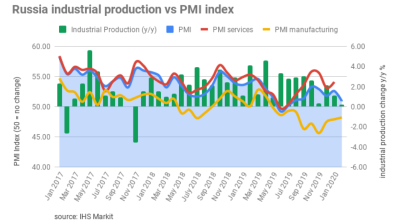 Russia’s IHS Markit Russia Services Business Activity Index fell slightly in February to 52.0, but the composite index stayed in the black at 50.9.
By Ben Aris in Berlin March 4, 2020

Russia’s IHS Markit Russia Services Business Activity Index fell slightly in February to 52.0 from 54.1 at the start of the year, but remains in the black ahead of the 50 no-change mark.

Services remain part of the Russian economy that has been consistently growing in the last few years as an increasingly large part of the economy goes online and, since December 2019, real incomes have started to grow again.

The positive services PMI result offsets the manufacturing PMI which came out last week and also showed an improvement, with the index rising from 47.9 at the start of 2020, to 48.2 in February, but that is still a contraction, as it remains below the 50 no-change mark, IHS Markit reported on March 2.

“The rate of growth [of the composite index] signalled was the slowest since July 2019 amid less robust demand conditions. At the same time, new order growth softened midway through the first quarter as foreign client demand fell for the tenth consecutive month. Although modest, the rate of expansion of overall new business was the slowest since last November,” Markit said in a note.

The Markit indices are based on interviews with business managers and these results were gathered before the full force of the coronavirus impact were felt on the Russian economy in the last week of February. Next month’s results are very likely to be much worse.

And the dark clouds were already gathering before the pandemic got going.

While the business environment was soggy that also meant that pressure on prices was depressed. Output charges fell for the second month running in services as muted input prices rises and greater competition weighed on pricing decisions, Markit reported.

New business growth was supported by a faster expansion in foreign client demand midway through the first quarter of the year. Although the upturn in total sales also softened to a five-month low, new export orders rose at the sharpest rate since last October.

Despite the poorer results the managers of services remain modestly upbeat about the rest of the year. Russian service sector firms recorded a greater degree of confidence in a rise in output over the coming 12 months in February.

“Positive sentiment was attributed to larger client bases, greater marketing activity and investment in new service lines. Although the level of optimism strengthened from January, when it recorded a three-year low, it remained below the series trend and was historically muted,” Markit said.

Taking manufacturing and services together Markit says that some of the marginal growth in the composite index was driven by a solid contraction in workforce numbers across the manufacturing sector. The fall coincided with a further reduction in strain on capacity, as shown by a drop in backlogs.