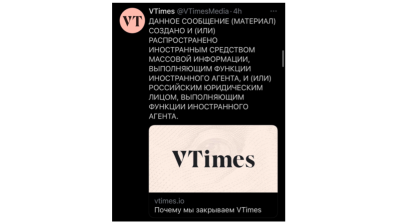 The Kremlin has launched a pogrom against the independent press that has seen titles' business models destroyed, and the atmosphere is so toxic that even publications that have left alone by the authorities are going bust.
By bne IntelliNews June 4, 2021

The well respected and widely read VTimes independent news service announced it was closing on June 3 after the Justice Ministry designated it as a “foreign agent” last month, the latest in a string of independent news organisations to be singled out by the Kremlin.

Analysts believe the Kremlin is clearing the field ahead of the key Duma elections slated for September and it has aggressively been targeting several leading titles with anti-government tendencies.

Russia’s “foreign agent” law was first introduced in 2012 in the wake of large-scale anti-government protests. The law initially targeted NGOs that the Kremlin believed had foreign funding and were acting as a fifth column inside the country to try to bring about a coloured revolution. The law has since been massively expanded to include “undesirable” organisations, a definition that includes media outlets as well as ordinary people using social media.

Meduza.io, another independent Russian-language online publication, was also labelled a foreign agent in May. Also highly respected, the editorial team is based in Latvia but the publication operates a Moscow office and has most of its reporting staff and readers in Russia. While the publication does receive funds from the Swedish government, amongst a few foreign donors, the bulk of its income comes from Russian advertisers, who all fled after it was branded a foreign-funded publication.

Meduza is soldiering on after it managed to crowdsource enough money to continue for a few more months, but management said in a public statement that its business model has been “destroyed” and it is now casting about for new revenues to be able to continue its work. Many of its journalists have already quit, unwilling or unable to accept the mandatory pay cuts the management implemented to spin out what resources it has left.

The Kremlin’s aggression towards independent media has created an atmosphere that has become so toxic that news outlets that have not been targeted are also folding.

VTimes follows news aggregation service Newsru.com to the grave after 21 years, which also said it was closing this week as advertisers have fled thanks to the Kremlin’s new extremely aggressive attitude to the media. Newsru.com mostly hosts stories from other news organisations and has few journalists of its own. And yet the miasma that has settled over the media space is so dark that advertisers don't want to be associated with any media that is not state-owned.

As bne IntelliNews reported last month, the Kremlin is clearly on a campaign to stamp out of the opposition press and has moved against the most prominent publications that are regularly critical of the Kremlin and the government’s policies. And the phenomenon is not just limited to Russia; similar moves have been seen in Ukraine and several EU accession countries such as Poland and Hungary.

VTimes was launched last October by a group of former senior editors and journalists who left the business daily Vedomosti after clashing with newly appointed and Kremlin-friendly chief editor Andrei Shmarov.

Vedomosti was originally a joint venture set up in 1999 between the Financial Times, the Wall Street Journal and Independent Media that publishes the Moscow Times. It quickly established itself as the paper of record in Russia and has always been outspoken in its opinions, criticising the Kremlin regularly, but was tolerated as it was fair and balanced in its reporting. However, things began to change in April 2015 when a new media law banned foreigners from owning more than 20% of a publication and both the FT and WSJ withdrew from the venture. Vedomosti was bought out by a group of state-owned companies, the staff of Vedomosti themselves reported after carrying out an investigation into their own paper. Eventually the new editorial management started interfering in the stories to an extent that the staff rebelled and most of the top reporters and editors left en masse and founded VTimes.

Independent Media remained involved in VTimes through a Dutch non-profit charity, but this was enough for the Russian Justice Ministry to declare the publication a “foreign mass media performing the functions of a foreign agent” last month.

In a statement, VTimes’ editorial staff said that its core sources of funding, advertisers and partners have pulled out en masse since the designation.

The rules for foreign agent publications also require them to carry a large (double font sized) declaration in all-caps of their foreign agent status, including tweets. That killed off the publications several million strong twitter account, as the declaration took up so much space that there was only room for one-line tweets in the remaining space.

It also killed off the paper’s access to government sources, leading businesspeople and analysts, who all started to refuse to give comments or interviews to its journalists for fear of retribution.

“When we launched VTimes last year, we announced that we were not creating a propaganda tool, but a high-quality and independent media outlet and a platform for the free exchange of constructive opinions. … And today we are proud to say: We did it! But we have seen for ourselves that the authorities do not need professional, non-government-controlled media,” its statement said. VTimes said it will cease publishing and fundraising on June 12 – Russia's Independence Day.

Under the law, any individual or group receiving funding of any amount from abroad can be labelled a "foreign agent." Labelled individuals and groups are required to report their activities and finances in rigorous audits and face steep fines for violations. Other media outlets are also required to clearly label the designated entities as “foreign agents”, and face fines if they don’t.

VTimes’ designation came weeks after Meduza, Russia’s leading independent news website based in Latvia, was also labelled a “foreign agent.” Meduza has vowed to challenge the label in court and launched a crowdfunding campaign in a bid to compensate for an exodus of advertisers.

The EU recently criticised Russia for its “foreign agent” legislation, saying it “contributes to a systematic infringement of basic freedoms, and restricts civil society, independent media and the rights of political opposition in Russia.”

On Tuesday, former Prime Minister Dmitry Medvedev defended the labelling of Meduza and VTimes as foreign agents, saying their readership “deserves to know what they are reading.”

The VTimes statement didn’t state what its staff will do in the future, only saying that “closing the VTimes project does not mean that we are abandoning our principles and leaving the profession.”

Court of bailiffs orders low-cost carrier to cease flying. Though planes are worth €145mn, the foreclosure is for just €26,000, sources complain to newspaper.

Thirteen EU states have condemned Hungary’s law in a joint statement, saying the anti-LGBT clauses of the bill violate the right to free expression.

The Council of the National Bank of Ukraine has sacked well-respected Deputy Governor Dmytro Sologub, who as part of the previous management team oversaw a comprehensive clean-up of Ukraine’s banking sector.

Bulgarian veto on start of accession talks with North Macedonia blocks both countries.

“The spiral of mismanagement has been running at full speed, at times astonishing even Erdogan loyalists,” writes Burak Bekdil.