Russia’s industrial production up 3.3% y/y in February, but zero if adjusted for leap-year effect 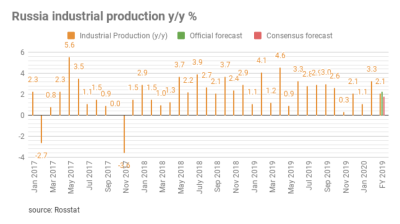 Russia’s industrial production expanded by 3.3% y/y in February, up from 1.1% a month earlier, but was zero if adjusted to take the leap-year extra day into account.
By bne IntelliNews March 18, 2020

Industrial production in Russia remains lacklustre and has slowed since the third quarter of last year to an unimpressive start in 2020. The February results will be the last before the full impact of the coronavirus (COVID-19) pandemic hit the economy and economists are expecting the results to start tumbling in the coming months.

“Rosstat has reported that industrial production was up +3.3% y/y in February. Our projections for February stood at +2.0% y/y, while the Bloomberg consensus had estimated growth at +1.0% year-on-year,” says Isakov. “The acceleration in the annual growth number can mainly be attributed to the fact that February this year had one day more than a year ago (however, at the same time, there was one working day less). Adjusted for the calendar factor and seasonality, IP growth would be close to zero, on our estimates," wrote Isakov.

Still, the headline growth in industrial production was encouraging in February. The growth in industrial production was mainly supported by manufacturing, which advanced to +5.0% y/y from the prior +3.9% y/y, while the output in mining & quarrying accelerated to +2.3% y/y, from the previous ­0.4% y/y, mainly driven by crude oil extraction rising to +3.2% y/y in February, from ­0.7% y/y in January.

The production of electronic and optical equipment was driven by the fulfilment of large government contracts. The item level data in Rosstat's flash report shows that the production of computers was up +46% y/y, whereas the output of radio navigation equipment was in the black, at +29% y/y, as reported by Rosstat.

In food production, the output of most of the items increased in annual terms: meat (+6.6% y/y), potatoes (+22% y/y), sunflower seed oil (+24% y/y) and sugar (a seven-fold increase) were all in the black in February. The supply of food continued to put downward pressure on food prices, as shown in the most recent CPI data: food prices were up +0.25% m/m seasonally adjusted (+0.33% m/m seasonally adjusted is consistent with the target), reported VTBC. Gasoline (+5.7% y/y) and diesel fuel (+4.9% y/y) fostered the growth in the output of petroleum products.

“In order to get a sense of whether the outbreak of Covid­19 has already had an impact on the output in manufacturing, we examine at, which industries had the most negative impact on the change in growth in manufacturing in February: the production of metals (­0.4pp), machinery and equipment (­0.4pp) and repair and installation of equipment (­0.2pp) had the greatest negative contribution,” said Isakov.

The production of metals seemed to decelerate in February due to the base effect: in 2019, the growth in basic metals production accelerated to +3.8% y/y in February, from +0.2% y/y in January.

Both electricity and gas (­0.2% y/y) and water (­1.4% y/y) production were in the red, largely due to the fact that February this year was on average 4°C warmer than a year ago.

“At this point, the industrial production data does not seem to have been affected by the outbreak of Covid­-19,” Isakov said.