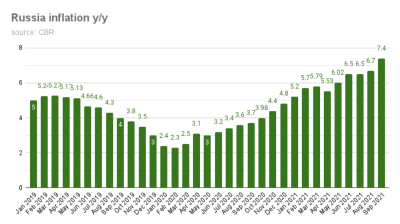 Russia's consumer price inflation continued to accelerate, posting 7.4% year on year and 0.6% month on month in September 2021, according to the latest figures released by the RosStat statistics service. Core inflation was 0.8% m/m and 7.6% y/y, with both core and headline inflation exceeding market expectations, even despite the previously posted uptick in weekly price pressures.

As reported by bne IntelliNews, inflation is still on the rise and inflationary expectations remain elevated. Last month the Central Bank of Russia (CBR) continued to toughen its monetary policy and raised its key rate by 25 basis points to 6.75% per annum.

High price pressures were maintained in September mostly due to prices for fruits and vegetables, accelerating food inflation from 7.7% y/y in August to 9.2% in September, leading to an additional increase of 40 basis points in the headline CPI rate, Sova Capital commented on October 7.

The non-food segment saw a marginal increase from 7.97% y/y to 8.06% y/y due to tyres, new cars, computer monitors and other electronics. Consumer prices also showed a moderate acceleration in the services space from 3.78% y/y in August to 4.2% y/y in September.

Notably, the latest weekly data as of October 5 pointed to a further acceleration in the headline rate, Sova analysts warn, suggesting that consumer prices maintained a high pace of 0.26% week on week, bringing the current y/y estimate to 7.69%.

"We believe that price pressures lasting longer than expected could require additional measures from CBR, leading to a 50bps hike in October and another 25bps hike in December, putting the key rate at 7.5% at 2021," the analysts at Sova Capital argue.

The analysts previously expected the CBR to finish its tightening cycle with a 25bp rate hike at its meeting on October 22, but the higher level of inflation is likely to prompt another 25bp hike, to 7.50%, at its following meeting in December.