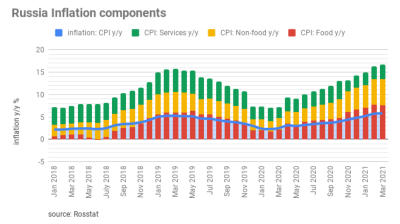 Food prices started to fall a little in March taking some of the upward pressure off prices and inflation is expected to moderate in the coming months
By bne IntelliNews April 7, 2021

Russia's consumer price inflation in March 2021 posted 0.7% month on month and 5.8% year on year (versus 5.7% y/y in February and 5.2% y/y in January), according to the latest data from RosStat statistics bureau. The reading was in line with Bloomberg consensus expectations.

As reported by bne IntelliNews, inflation is back in focus, as it remains far above of the 4% target, the government is planning to increase spending and geopolitical tensions spike.

"After almost a year of acceleration and of market and official expectations being exceeded, consumer inflation seems to have surpassed its peak," Sova Capital commented on April 7.

"After peaking at a 4.5-year high, y/y inflation will start to decelerate in the coming months helped by the base factor effect," BCS Global Markets wrote on April 7, yet warning that geopolitics and a weaker ruble could make this trend more protracted.

"Although we continue to see inflation accelerate, the weekly dynamics suggest the acceleration in consumer prices reached a peak of about 6% in mid-March," Sova also writes, noting that "while we were expecting negative surprises (e.g. CPI reaching 6% y/y by the end of March), they did not materialise."

BCS GM's chief economist Vladimir Tikhomirov believes that the CBR is likely to deliver another key interest rate hike in April, as CPI is expected "to remain sticky" at 5% or higher levels throughout 2Q21 due to global inflationary pressures and geopolitical risks counterbalancing the lower base effect.

"We forecast that CBR’s key rate will rise by 25bp to 4.75% on April 23, when the bank meets next time," Tikhomirov argues, and estimates that 2021 inflation could slow to 4.5% y/y (not taking into account a possibility of a further rise in geopolitical tensions).

"With inflation starting to slow down, monetary authorities' main concern is the speed and scope of Russia’s economic recovery, which could keep inflation at elevated levels at 2021 and interfere with CBR’s plans to keep inflation around its 4% target by 1H22," Sova Capital writes.

Sova analysts see full-year 2021 inflation at 4.4% due to the rebound in growth and elevated inflationary pressures. "This should prompt CBR to tighten its monetary policy further to 5% by 2021", they argue.

Sova believes the risks skew to the upside given the volatility in the exchange rate, which is inflated by geopolitical risks, budget outlays produced by inflation and a stronger-than-expected pickup in business activity, as well as supply-demand mismatches.

Following the move, the analysts expected the regulator to continue monetary tightening in 2021, hiking the rate to 5%. This week Capital Economics also expected two more 25bp hikes to the benchmark repo rate for this month and June, taking it to 5%, in line with consensus forecast collected by Bloomberg.

FPRI BMB Ukraine: Turning up the heat in the Donbas and Crimea
Nakhchivan rail plans promise to rewire Caucasus connections
Minor outflows from Russian equity and bonds, despite talk of war with Ukraine

Romania's retail sales index increased by 1.5% y/y in January-February compared to the same period last year — softer growth than previously but still positive despite the worsening of the pandemic in early 2020.

The seasonally adjusted IHS Markit Russia Services Business Activity Index jumped to a seven-month high of 55.8 in March, up from 52.2 in February, the consultants said in a press release on April 4.

Minor outflows from Russian equity and bonds, despite talk of war with Ukraine
2 days ago
Labour demand rebounds in Croatia
4 days ago
Slovenia’s blue-chip index at its highest level in over a decade
4 days ago
Romania’s retail sales growth moderates to 1.5% y/y in Jan-Feb
6 days ago
Russian services PMI jumps to seven-month high in March
6 days ago