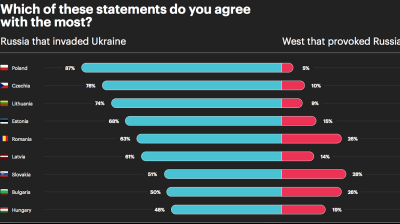 Russia’s invasion of Ukraine has led more Central and Eastern Europeans to see it as a threat, and has boosted support for EU and Nato membership, according to a regional opinion poll published by Globsec, the Slovak security think-tank.

However, close to half of respondents in Hungary, Bulgaria and Slovakia do not place primary responsibility on Russia for the war in Ukraine.

Compared to last year, the share of Slovaks perceiving Russia as a threat increased from 20% to 62%.

"Today, Russia is perceived by most Slovaks as a threat, but paradoxically, at the same time, 37%, most in the region, perceive it as a strategic partner of Slovakia. One of the reasons may be the constant accentuation of our dependence on Russian gas in the political debate, which is transformed into the perception of Russia as a partner, "said Katarína Klingová, senior analyst and author of the publication.

In all countries except Romania there has also been an average increase of 10 percentage points in the proportion of respondents saying they feel part of the West compared to last year. In Romania the figure fell from 43% to 27%.

In Slovakia, the increase was from 26% to 34%, though most respondents – 51% – still prefer the position of Slovakia being "somewhere in the middle" between East and West.

There was also a smaller increase in support for Nato membership in all countries, except Bulgaria, where there was an increase to 38% in the proportion that actually want to leave Nato. Four out of five respondents across the region want to be part of Western structures, and three quarters see the US as a key ally, up 10pp.

"Support for Nato in Slovakia has been growing continuously for the fourth year in a row, when we started measuring. Today, support is at 72%, which we can perceive as a response to the current security situation, but also a consequence of the long-term work of some institutions that have been communicating the benefits of alliance membership in recent years,” "said Jana Kazaz, Globsec analyst.

In Czechia, traditionally the most Eurosceptic country in the region, there has been a 13pp increase in backing for EU membership, which now stands at 80%.

However, there was less consensus across the region on whether Russia was primarily responsible for the war in Ukraine. Only 51% of Slovaks, 50% of Bulgarians and 48% of Hungarians placed the responsibility on Russia. In Slovakia (28%), Bulgaria (26%) and Romania (26%) many blamed “the West that provoked Russia”, as well as in Hungary (18%). Hungary had most (18%) respondents choosing “Ukraine that oppressed Russian-speaking part of the population” as their response.

In Slovakia, 16% also thought that Ukraine was responsible because it oppressed the Russian-speaking population, and 28% of respondents, the most among the countries surveyed in the region, believe that the West had provoked Russia. Some 23% of Slovaks also perceive Ukraine as a "puppet of the West", compared with only 7% of Czechs.

“The distorted view of certain segments of populations towards events in Ukraine, combined with potential economic hardship ahead, could leave these vulnerable groups as potential targets for populist and autocratic leaders,” Globsec concluded.

Some 54% of Slovak respondents even believe in conspiracy theories that secret groups govern the world.

"Despite the fact that some attitudes towards geopolitics have changed, the data have reaffirmed the strong propensity of Slovaks to believe in conspiracy theories. The degree of agreement by conspiracy theories has not changed in Slovakia in recent years, and remains one of the highest in the region. In addition, Slovakia excels in the sense of threat. Approximately half of the respondents in Slovakia feel that their values ​​and identity are threatened by the West or migrants, "added Dominika Hajdu, who runs the Center for Democracy and Resilience.

Globsec says there is also no consensus within the region on the response to the war in Ukraine. While most people in each country agree to reduce energy dependence on Russia, support for sanctions, even at the cost of inflation, is clear in only seven of the nine countries – in Slovakia, support is exactly 50%.

Countries also disagree on whether Ukraine should join the EU and/or Nato or be neutral. In six out of nine countries there is a consensus on supporting Ukraine's membership in Western organisations, but in Slovakia, Bulgaria and Hungary there are more people in favour of the possibility of neutrality. In Hungary, only 23% back Ukraine joining Western structures, and 80% believe it should be neutral.

Despite the fact that democracy as a suitable system of government for Slovakia is approved by three quarters of respondents, support for an autocratic leader has increased for the second year in a row. As many as 49% of respondents in Slovakia responded positively to the statement that a strong leader who does not have to worry about parliamentary or elections would be good, which represents an increase on 38% in 2021 and 25% in 2020.

In the Czech Republic, only 29% of respondents would back an autocratic leader, which is the least in the nine countries surveyed. In Romania support for autocracy was the highest in the region at 60%.

"The support of autocrats is also reflected in the positive perception of specific leaders. Only 4% of Czechs perceive Vladimir Putin positively, but up to 24% of Slovaks. The same is true for Chinese President Xi Jinping, who is perceived positively by only 15% of Czechs, but by up to 25% of Slovaks, " said Michal Kortiš, a junior analyst.

ING: ECB hikes by a historic 75bp, more hikes in the works

Nuclear power's share dropped to record low in OECD, but solar jumped to record highs thanks to hot summer
ING: ECB hikes by a historic 75bp, more hikes in the works
Eastern EU governments under pressure to act on rising living costs