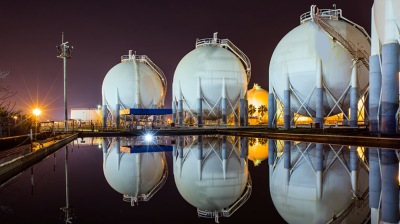 Russia has kept its oil and gas production capped in keeping with the terms of the OPEC+ deal, but the production of liquefied natural gas (LNG) has soared in the last year, as the Kremlin hopes to turn gas into a commodity that can be sold anywhere, like oil.

LNG output was up +86% y/y in July, according to Reuters, well ahead of all other raw material production in Russia, including crude oil.

Russia has been investing heavily into LNG production through the vehicle of privately owned LNG producer Novatek. Currently Russia produces some 10mn tonnes of LNG a year, but has ambitions to increase that to over 80mn tonnes in the coming years.

The state-owned gas giant Gazprom has also begun to invest into LNG. Gazprom expects its LNG portfolio to exceed 6mn metric tonnes (mmt) by 2020, from 4mmt in 2018.

And LNG is already a big business. Russian LNG exports surged 54.5% year on year in the first half of 2019, data published on August 8 by the Federal Customs Service shows, while piped deliveries overseas slumped 4.9%.

Shipments of super-chilled natural gas totalled 29.4bn cubic metres in the six-month period, with growth driven by Novatek’s Yamal LNG terminal reaching its full 16.5mmt per year capacity last December. Russia’s other LNG export facility on Sakhalin Island is operated by state-run Gazprom and has a capacity of more than 10mmt per year.  In monetary terms, LNG sales were up 70.1% y/y at $4.5bn, on the back of higher international gas prices.

Novatek’s stock has doubled in value in the last year on the back of ballooning profits it is making from the LNG business based on the Yamal gas field in Russia’s north. Yamal LNG posted revenues of $2.3bn in 1H19, while Ebitda stood at $1.9bn, down just 5% half-on-half even though spot gas prices dropped 40-45% h/h.

The company’s profits grew a staggering 725% in the first quarter of this year after Novatek decided to cash in on its second LNG project, Arctic LNG-2, in the reporting quarter, selling stakes to its French strategic partner Total and Chinese energy majors.

On the other hand traditional oil and gas production is rising only modestly as Russia has agreed to tread water with crude production in its deal with the OPEC oil cartel. Oil production in Russia rose to an average of 11.32mn barrels per day (bpd) in the first half of August, Interfax news agency reported on August 16, citing a source. Russia has committed to cutting output by 228,000 bpd from the 11.41mn bpd pumped in October 2018.

In July, crude oil extraction contracted -0.7% y/y, after the +2.8% m/m recovery from the Druzhba “dirty oil” incident this summer when large amounts of oil in the pipeline that runs across Ukraine to Russia’s European customers was contaminated with chlorides. Natural gas extraction increased by a slight 0.3% y/y, reflecting weakening demand for the commodity in Europe.

Overall Russian oil and gas production climbed further in the first seven months of 2019, despite cutbacks relating to the dirty oil crisis and a recent dip in gas exports.

Rosstat reported a modest increase in industrial production in July, but the big lacuna in the state statistics agency’s calculations is they don't take into account the LNG production, which has increased at an average of +63% y/y in 2019, according to VTBC.