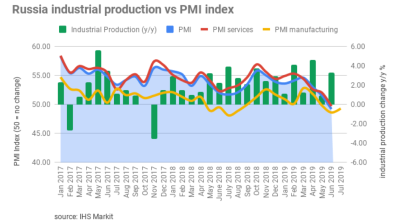 Russia’s manufacturing PMI index up only slightly to 49.3 in July from 48.6 a month earlier
By bne IntelliNews August 1, 2019

Russia’s manufacturing PMI continued to contract in July, with the index up only slightly to 49.3 from 48.6 a month earlier, but was still below the 50 no-change mark, IHS Markit reported on August 1.

“The July survey data signalled a further decline in the health of the Russian manufacturing sector, driven by another contraction in output and a drop in new business. The fall in client demand was seen among domestic and foreign customers, with new export orders decreasing at the fastest pace for five months. At the same time, optimism among manufacturers was the joint-weakest for a year,” Markit said in a press release.

The one bright spot was that employment returned to expansionary territory for the first time since March.

In an effort to bring in new orders, some firms engaged in discounting activity, with charge inflation easing amid a softer rise in input costs, Markit reports.

The latest manufacturing PMI headline reading indicated a third successive deterioration in operating conditions across the Russian manufacturing sector. That said, the decrease at the start of the third quarter was only marginal overall.

Production levels for Russian manufacturing firms fell for the second consecutive month in July, albeit at only a fractional rate. The pace of decline softened from that seen in June, but was attributed to a further decrease in new business. Goods producers linked this to weaker demand conditions and reduced purchasing power among clients.

The decrease in new orders received by Russian manufacturers was broadly in line with that seen in June, which was the quickest since July 2018. The downturn was seen among both domestic and foreign clients, with new business from abroad declining for the sixth time in the last seven months, and at the fastest rate since February.

Likewise, industrial production picked up in June to expand by 3.3% from 0.9% a month before. At the same time, bne IntelliNews reported Russian corporate and bank profits are currently at their strongest in the last four years, as at the corporate level an economic recovery is gathering momentum.

Despite the decline in new business, Russian goods producers increased their workforce numbers for the first time in four months in July. The fractional rise in staffing levels was partly linked to efforts to process new orders, which allowed backlogs to reduce sharply. The level of outstanding business fell at a marked pace that was one of the fastest in two years.

Manufacturers registered the joint-weakest degree of confidence in future output since July 2018, with reduced purchasing power among clients weighing on optimism. However, this result is contradicted by the Rosstat survey that found corporate confidence had stayed stable and relatively high compared to recently years at the level of -1.

Finally, inventory levels continued to fall as stocks of inputs and finished goods both declined during the latest survey period. Purchasing activity increased only fractionally, in part down to efforts to replenish stocks.

Siân Jones, economist at IHS Markit, which compiles the Russia Manufacturing PMI survey, commented: "Russian manufacturers continued to highlight difficult demand conditions going into the second half of 2019, with new orders contracting for the second month running. Lower client purchasing power and issues with finance reportedly hampered demand from domestic and foreign customers. Despite the downturn in output and lacklustre business confidence, employment rose for the first time since March as firms ramped up efforts to clear backlogs. Nonetheless, the rise was only fractional overall.”

"Meanwhile, inflationary pressures softened further in July as slower increases in raw material costs and discounting among some firms weighed on any rises in factory gate charges,” Jones added.

Belarus GDP grew by 1.2% y/y in 2019
11 hours ago
Jump in Polish CPI confirmed at 3.4% y/y in December
2 days ago
Romania’s external debt rises on chronic wide CA gap
3 days ago
Ukraine consumer inflation ends 2019 at 4.1%
4 days ago
The number of unemployed Czechs reached its lowest level since 1996
8 days ago