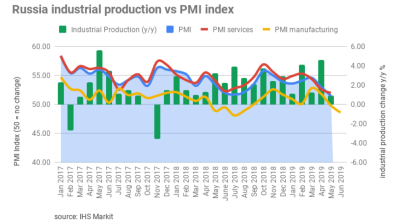 The seasonally adjusted IHS Markit Russia Manufacturing Purchasing Managers’ Index fell to 48.6 in June, down from 49.8 in May, signalling a slight deterioration in the health of the Russian manufacturing sector, Markit said in a press release on July 1.

The latest headline figure was the lowest since July 2018 and indicated downward pressure on growth at the end of the second quarter of 2019 as the result is below the 50 no-change mark.

Markit reports that the manufacturing sector deteriorated for the second successive month, due to downturns in output and new business.

“The slowdown in client demand resulted in a further fall in workforce numbers and a faster depletion in backlogs. Firms also reacted to lacklustre demand by increasing output charges at the slowest pace since March 2018, with some highlighting discounting and promotional activity,” Markit said.

The slowdown in the forward-looking Markit survey mirrors a sharp slowdown in May in Russia’s industrial production, according to Rosstat. Russian industrial output slowed to 0.9% year-on-year in May from 4.6% y/y posted in April, according to the official figures. Industry in the reporting month underperformed analysts’ consensus expectation of 1.4% growth.

In general Russia’s household and corporate activity remained sluggish in the first quarter, says ING. May data on household income and consumption is slightly better than expected although this could be down to one-off factors. Corporate activity is clearly subdued but may see some support from the scheduled pick up in state spending in the second half of this year, ING said in a note.

Manufacturers remained upbeat overall with output expectations towards the coming 12 months above the long-run average, but confidence eased to a near one-year low.

This contradicts the more recent Rosstat survey that saw business confidence tick up by one percentage point to -1%, but the investment climate clearly remains depressed as fixed income had declined for four months in a row as of the end of May.

Weighing on June's headline PMI was the first contraction in new business since August 2018. The fall was only slight, but signalled a notable turnaround from March's recent high, Markit said.

On the price front, input costs rose again in June, despite the fact that headline inflation fell sight to just under 5% after it rose from 4% in the first quarter of this year.

“Manufacturers stated that higher raw material and supplier prices drove cost burdens up. That said, the rate of inflation was the softest since July 2017. Firms partly passed greater input prices on to clients through higher charges, but the pace of increase was only marginal overall, with some panellists suggesting that discounting and promotions held back rises in charges,” Markit said.

Meanwhile, strain on capacity was reduced further in June as backlogs of work continued to decrease. The fall was the fastest since March. Lower production requirements also had the knock-on effect of reducing employment further.

Finally, output expectations over the coming 12 months remained above the historical trend, but eased to a near one-year low. Manufacturing firms stated that less robust confidence was linked to a drop in demand and lower client purchasing power.

Siân Jones, economist at IHS Markit, which compiles the Russia Manufacturing PMI survey, commented: "The Russian manufacturing sector continued to show signs of weakness in June, as production and new business dipped into contractionary territory for the first time since August 2018. Pressure on capacity was reduced further as backlogs fell markedly despite workforce numbers continuing to fall.”

"Weighing heavily on overall demand conditions were lacklustre export sales. In fact, panellists reported greater promotional activity and discounting in an effort to bring in new clients and gain sales,” Jones added. "A second successive deterioration in operating conditions led to less robust output expectations towards the coming 12 months. The degree of optimism softened for the third successive month to a near one-year low amid lacklustre client demand."

Turkey sees unexpected rise in inflation as lira weakness pushes up prices
8 hours ago
Russia's services PMI bounces back to 35.9 in May from a record low of 12.9% in April, but business still contracting
13 hours ago
Easing of lockdowns offers hope to emerging Europe’s COVID-struck economies
1 day ago
Kazakh manufacturing ekes out PMI expansion in May
1 day ago
A third of Russians are ready to participate in a mass protest against falling living standards
1 day ago