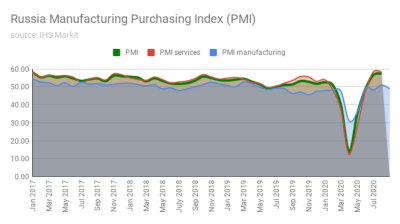 IHS Markit Russia Manufacturing PMI registered 48.9 in September, down from 51.1 in August and back below the 50 no-change mark
By bne IntelliNews October 1, 2020

The latest IHS Markit Russia Manufacturing Purchasing Index (PMI) survey data indicated a marginal deterioration in operating conditions across the Russian goods-producing sector at the end of the third quarter, driven by a fall in new orders as client demand weakened.

The headline seasonally adjusted IHS Markit Russia Manufacturing PMI registered 48.9 in September, down from 51.1 in August and back below the 50 no-change mark that signifies a contraction.

The marginal decline in the manufacturing sector was, however, much slower than that seen during the depths of the coronavirus (COVID-19) pandemic earlier in the year, when the index crashed to lows never seen before.

Despite the fall in the PMI, manufacturing output continued to rise, and at a solid rate, as firms resumed operations following the loosening of coronavirus disease restrictions. Meanwhile, business confidence moderated and employment fell further amid lower new order inflows.

On the price front, the rate of output charge inflation picked up in September and input costs continued to increase sharply.

The Russian economy has been recovering well over the summer and in general is believed to be doing better than in either of the other two major crises in 1998 and 2008. However, a resurgence of the coronavirus rates of infection in September is expected to weigh on the recovery going forward. There is talk of a new lockdown but the government remains extremely reluctant to impose one.

Contributing to the overall decline was a renewed fall in new orders in September. The decrease reportedly stemmed from muted client demand and cancelled projects. The rate of contraction was solid overall and the fastest since June.

Similarly, new export sales were reduced and the pace of decline quickened notably since August.

Cost burdens also rose markedly. The rate of input price inflation eased slightly since August but was still among the fastest for two years, as raw material shortages and supplier price hikes pushed up costs. Despite weak demand conditions, firms were able to partially pass on greater costs to clients through an increase in charges. The pace of output price inflation was solid overall and the fastest for four months.

In line with subdued client demand, firms cut their workforce numbers further in September. Unemployment has risen from last year’s lows of around 4.2-4.3% to 6.4% in August, which is still low by historical standards.

The rate of job shedding accelerated to a strong pace, as companies stated that weak new order inflows and excess capacity had driven the decline. At the same time, backlogs of work decreased marginally. Although extending the current sequence of depletion to three years, the latest data indicated the slowest fall since January 2019.

Firms remained optimistic about the prospects of a rise in output over the coming 12 months amid hopes of an end to the pandemic and new product development. The degree of confidence was the softest for four months and below the series average, however, as muted new order inflows weighed on sentiment.

Webinar & Podcast: Whither Ukraine in 2021?
Turkey to scrap asset ratio slapped on banks year ago
Turkey’s 10-year eurobond in market with final cost expectation of 6.10%