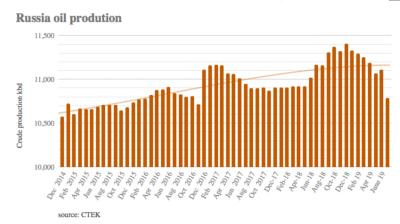 Russia’s output is now lower than the agreed level that was cut under the OPEC+ deal that Russian president Vladimir Putin recently renewed with OPEC on the side lines of the G20 summit with Saudi Crown Prince Mohammed bin Salman (MBS).

Rosneft said that Transneft hurt its output by curbing oil intake from Yuganskneftegaz, the oil producer’s main upstream unit. Rosneft’s production was already depressed by the contamination of oil with chlorine earlier the same month.

Transneft and Rosneft have been at loggerheads over efforts to resolve the problem of contaminated oil found in April in the Druzhba export pipeline to Europe. Supplies have only partially resumed since then, after weeks of disruption.

Transneft criticized Rosneft on July 9 over its handling of the tainted oil issue, saying the oil producer had dragged its feet over setting up quality controls for its oil and had made unsubstantiated claims from the pipeline firm.

Rosneft said it had read Transneft’s remarks with “regret”.

The heads of the two firms, Rosneft’s Igor Sechin and Nikolai Tokarev at Transneft, have often rowed in the past.

Despite formally denying any strife between their CEOs, the two companies have often clashed over issues such as oil transportation fees and Rosneft’s rising oil exports to China.

Sechin, 58, has been close to President Vladimir Putin for two decades, while Tokarev, 68, is also a long-time ally. Putin, Tokarev, and Sechin all worked in the city administration for St Petersburg in the 1990s after the collapse of the Soviet Union.

When asked to comment on the row, Kremlin spokesman Dmitry Peskov told reporters on a daily conference call that it was a “corporate matter”.

Transneft transports 83% of Russian oil via its network, while Rosneft accounts for over 40% of Russian output.

Russia's services PMI bounces back to 35.9 in May from a record low of 12.9% in April, but business still contracting
Easing of lockdowns offers hope to emerging Europe’s COVID-struck economies
Russian government presents National Recovery Plan to President Putin