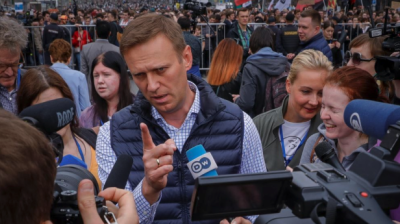 Russia’s General Prosecutor’s Office (GPO) doesn’t see any grounds for opening a criminal case into the poisoning of anti-corruption blogger and opposition activist Alexei Navalny, it said in a press release on August 27.

However, the press release was almost immediately deleted after the first reports on the decision came out. No explanation was given for the decision.

The GPO’s statement said that no information “evidencing a deliberate criminal act committed against Navalny” had come to light so far to necessitate an investigation.

However, the department did announce a preliminary inquiry, noting that this is standard procedure in response to serious incidents involving air passengers.

Navalny fell suddenly and seriously ill during a flight from Tomsk in Siberia to Moscow on August 20. His plane had to make an emergency landing in Omsk, where he was taken to hospital. He fell into a coma and was transported to Berlin two days later, where German doctors confirmed that he had been poisoned.

The GPO said it had contacted the German judicial authorities to ask for legal assistance, including copies of the German doctors’ medical reports treating Navalny in Berlin.

The appearance and sudden disappearance of the GPO statement continues a string of unco-ordinated events surrounding the case, which has left the Kremlin looking confused and unsure of how to deal with the Navalny poisoning.

Initially the doctors in Omsk were friendly and helpful when Navalny was admitted, but then suddenly became distant and obstructive. Initially they said that Navalny had probably been poisoned, but then refused to share any information with the family and refused to allow him to be transported to Berlin, because he had been poisoned with an agent so powerful that everyone around him was at risk. Just before Navalny was finally loaded on the hospital plane – two days later – the chief doctor came out with a statement saying they had found no traces of poison and that Navalny was suffering from “low blood sugar.”

Navalny’s wife Yulia accused the doctors in Omsk of delaying his transfer in the hope that the toxin in his system would dissipate in two days and become undetectable.

This string of farcical events and statements suggests Navalny was not the target of a security services’ hit and the Kremlin was unprepared when the news of Navalny’s poisoning broke.

As a leading corruption blogger Navalny has a lot of enemies and the manual control of Russian President Vladimir Putin’s “vertical power” system means that the players at the top of the system can act with impunity and expect Putin’s protection.

Even while Navalny lies in a Berlin hospital in a coma he is still being attacked.

Kremlin-connected Russian businessman Yevgeny Prigozhin and Putin confidante bought a debt of RUB87mn ($1.2mn) Navalny owes to a company and says he intends to collect the debt if Navalny lives.

Prigozhin has been accused of owning the Wagner mercenary company used by Russia in Syria and other conflicts. He is known as Putin’s chef, as he also owns a catering company that services the Kremlin.

He announced on August 25 that he had bought up the debt owed by Navalny and his company relating to a lawsuit settlement won by a Moscow school-catering company that Prigozhin owns.

"If Navalny lives, he must answer to the fullest extent of Russian law," Prigozhin said in a statement issued through Concord, his catering company.

"Of course, if Comrade Navalny gives his soul to God, then personally I do not intend to persecute him in this world. I will postpone this [debt settlement] indefinitely."

Bellingcat, Der Spiegel, and The Insider have reported that the German doctors treating Navalny have reached out to the Bulgarian medics that treated Emilian Gebrev after his poisoning in 2015. The papers suspect that the German doctors believe Navalny was poisoned by the same toxin, although the Berlin hospital has declined to comment on any speculation.