Russia's saw another month of declining car sales in November, down 20% 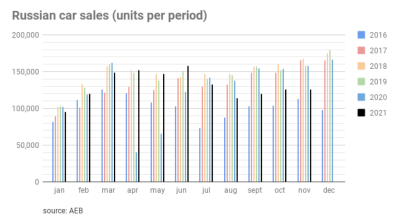 Russia's saw another month of declining car sales in November, as units sold (excluding Mercedes-Benz and BMW) were down 20.4% year on year at 125,466 units, according to the latest report published by AEB on December 6.

“The reason for this decline remained broadly unchanged, with the microchip shortage continuing to weigh on the supply side, coupled with the relatively high base effect of November 2020. We note that, due to the strong 1H21, 11M21 sales were still 6.9% higher than in 11M20, at 1.4mn units. Assuming that the rate of decline remains broadly unchanged in December, we believe that the FY21F sales of new cars and LCVs will increase 4% y/y to 1.67mn units,” VTB Capital (VTBC) said in a note.

In contrast, Ford Transit sales (produced by the JV with Ford, is consolidated by Sollers) massively outperformed the market, increasing 74% y/y to 2,123 units in November. Its 11M21 sales were up 52% y/y at 17,739 vehicles.

“We remain neutral on Sollers (Hold; 12-mo TP RUB250; ETR 19%) due to the bleak prospects for its UAZ brand, as well as the uncertainties over the company's strategy towards minority shareholders,” VTBC said.