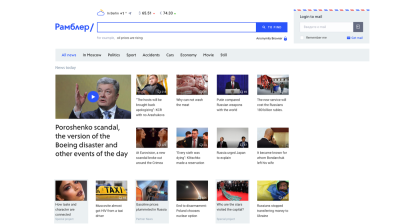 Reportedly the two sides are negotiating an acquisition of non-controlling stake in Rambler, in order to enrich the ecosystem of Sberbank with digital media and entertainment services, which was confirmed by the companies that declined to comment further.

Previously in 2018 reports suggested that Sberbank is staging a hostile takeover of Russian internet major Yandex, with which it already operates a large joint venture Yandex.Market marketplace. But as the founders and shareholders of Russia’s most valuable digital company made changes to shareholder structure, no deal followed.

Now Sberbank could be considering Rambler as its main internet platform, analysts surveyed by Vedomosti suggest. The bank is developing an integrated ecosystem of digital services. The CEO German Gref in 2018 said that Sberbank could in the future drop the "bank" from the name while transforming itself into the Sber ecosystem that covers all basic need of both the corporate and private clients.

Rambler was formed in 2013 as tycoons Mamut and Vladimir Potanin joined their video assets. The holding includes online and traditional cinemas, anchor portal Ramble.ru, a number of popular internet publications and portals such as Lenta.ru, Gazeta.ru, Afisha, and others. In 2016 Mamut bought out Potanin’s stake for about $295mn.

Online media assets are in focus as recently one of Russia's "big four" operators MobileTeleSystems (MTS) is considering the acquisition of “the Russian Netflix,” online cinema provider ivi, the market leader with a 36% share, for RUB20bn ($309mn).

Russia’s media market in general is growing fast, driven by the burgeoning e-commerce sector. The media market expanded by 12% y/y to RUB468.7bn in 2018, according to estimates from the Association of Russian Advertisers (AKAR), VTB Capital (VTBC) said in a note on March 11.