Russia’s Service PMI posted a strong 55.8 in October, offsetting a slowdown in manufacturing 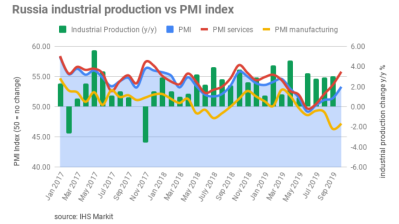 Russia’s Service PMI posted a strong 55.8 in October up from 53.6 in September and lifting the composite index to 53.3
By Ben Aris in Berlin November 6, 2019

Russia’s Service PMI posted a strong 55.8 in October, up from 53.6 in September and helped lift the Composite PMI to a healthy 53.3, up from 51.4 in September. Any score over the 50 no-change mark represents an expansion.

The robust services sector help compensate for the contracting manufacturing sector, although the 47.2 that manufacturing posted in October was an improvement on the 46.3 from a month earlier. Manufacturing slowed on weakening client demand and led to job layoffs, but respondents remain optimistic about business prospects going forward.

Services have been doing much better than manufacturing over the last two years as Russia emerges from the crisis of the 2014 oil price collapse and subsequent devaluation.

The October survey results signalled a strong expansion in business activity across the Russian service sector, largely underpinned by a sharper upturn in new orders, reported IHS Markit that produces the index.

“Both external and domestic client demand picked up at the start of the fourth quarter, with new business from abroad growing at the fastest rate since May. Subsequently, employment rose at a moderate pace as backlogs of work were depleted at the slowest rate for five months. Buoyed by a sustained rise in new orders, business confidence towards future output ticked up,” Markit said in a release.

New business received by service providers rose for the fourth successive month in October, with the rate of growth accelerating to the fastest since March due to the acquisition of new clients and greater demand from existing customers.

Consequently, service providers registered a second successive rise in employment in October. The rate of job creation quickened to a moderate pace that was the fastest since February.

On the price front, cost burdens increased at a relatively subdued rate in October and inflation in the sector remains subdued. The pace of input price inflation slowed to the softest since early 2018. Firms that reported an increase in operating expenses linked this to higher supplier costs. Subsequently, service providers increased their output charges, albeit at a rate that was slower than the long-run series trend.

Lastly, business optimism remains buoyant in the sector and strengthened in October thanks to new client acquisitions and the development of new service lines. The level of positive sentiment reached a five-month high but remained slightly below the series average.

Commenting on the PMI data, Siân Jones, economist at IHS Markit, said: "At the composite level, a stronger performance across the service sector underpinned overall business activity growth as manufacturing sector output remained in contraction. Meanwhile, historically subdued increases in costs and charges supported recent moves towards stimulus by Russia's central bank, amid a larger than expected reduction in interest rates in October."