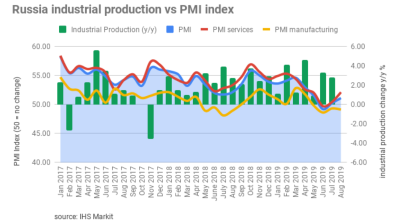 Russia’s services PMI bounced back in August to 52.1 from just treading water in July.
By Ben Aris in Berlin September 4, 2019

Russia’s services PMI bounced back in August from just treading water in July and lifted the composite index result, IHS Markit said in its latest data release on September 4. The services PMI came in at 52.1 in August, up from 50.4 a month earlier, which was only just above the 50 no-change mark.

The services PMI result follows from the manufacturing PMI released two days earlier that improved a little but still posted 49.1 in August, which represents a mild contraction in manufacturing.

Taken together the overall composite index was lifted by the recovery in services to post 51.5 in August, up from the almost flat 50.2 recorded in July.

While the positive results are welcome, the poor performance of manufacturing highlights the weakness of Russia’s growth this year. The economy is moving out of several years of recession but it has not been able to gather any momentum, and services are carrying the can for the limping manufacturing sector.

Russian service sector firms registered a quicker increase in business activity in August. Although only moderate overall, the pace of expansion was the fastest for four months.

Having said that, business owners interviewed by Markit remain optimistic about the outlook for the rest of the year.

Supporting the upturn in services was a stronger increase in new business and a renewed rise in new export orders. However, the general squeeze the economy is feeling means that service companies reduced their workforce numbers for the fourth month running and service company owners are less optimistic about the outlook for the rest of the year than manufacturing. The degree of business confidence dipped to the lowest since March as service providers expressed greater uncertainty towards the wider economy. That said, firms were still hopeful of growth, with some attributing positive sentiment to new product development and an uptick in new business.

The mixed demand meant that price pressure is subdued in the service sector and in line with the overall trend in Russia of cooling inflation. Consumer price inflation (CPI) in August was 4.7% but that is expected to fall to 3.8-4% by the end of the year, inside the Central Bank of Russia (CBR) target rate of 4%.

The composite PMI increased, thanks to the service sector, at the fastest pace in three months. Nonetheless, the increase was slower than the long-run series average.

Following two successive monthly declines in new business, August data signalled a rise in new orders across the private sector, albeit only a marginal increase.

Commenting on the PMI data, Siân Jones, economist at IHS Markit, said: “The Russian service sector registered an acceleration in business activity growth in August, with a faster increase in new orders driving the expansion. External demand also rebounded, despite signalling only a fractional upturn in new export orders.

"Nevertheless, firms expressed further reluctance to increase employment and a lower degree of optimism towards future output. Many stated that confidence was dented by concerns about the wider economy.

"At the composite level, data indicated a renewed upturn in new business, despite difficulties in the manufacturing sector. That said, overall output growth was only weak by historical standards and well below the rates of expansion seen at the start of 2019," Jones added.

"In line with muted rates of inflation and a relatively modest expansion across the private sector, the Central Bank of Russia may choose to once again cut interest rates in September in an effort to boost consumer demand."

Wages in Romania grow in Q2
3 hours ago
Russia's GDP fell by 8.5% in 2Q20 due the lockdown quarantine measures
12 hours ago
Ukraine’s consumer inflation stayed at a 2.4% y/y level in July
19 hours ago
Romania’s exports continue recovering in June
1 day ago
ING analysts warn of L-shaped recession in Bulgaria
1 day ago