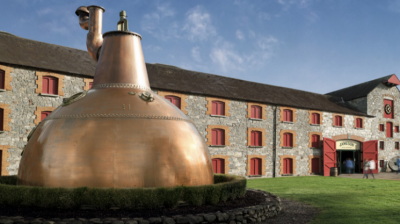 Irish whiskey is flying of the shelves in Russian bars, supermarkets and off-licenses, with the country now the second biggest market globally for the spirit after the US.

Distilleries say that the thirst for Irish whiskey is growing right across Central and Eastern Europe, as consumers increasingly turn away from traditional drinks such as vodka and schnapps. In Russia, anecdotal evidence suggests Irish whiskey sales have continued to grow exponentially since the pandemic started as restaurants and bars have remained opened there throughout.

The latest data from the Irish Whiskey Association shows Russia is the second largest geographic market with sales of 605,800 cases, or 7.3 million bottles, for the last recorded year in 2019, a jump of 231% since 2010. Russia has overtaken the UK, France South Africa, the domestic Irish market and only now lags the US. Premium brands, such as Jameson, Bushmills, Kilbeggan and Teeling, are proving to be hugely popular in Russia – as well as cheaper entry-level whiskeys such as Proper No. Twelve, the brand promoted by Conor McGregor “the notorious” mixed martials arts (MMA) fighter.

“Russia has continued to grow in 2020 and this year as most western markets have stuttered,” John Teeling, owner of Ireland’s Great Northern Distillery, told bne IntelliNews in an interview. “We have had many repeat orders and new clients. The taste of Irish whiskey obviously suits the Russian palette and the fact it’s an imported spirit goes well with the middle class, who want to show off by buying imported spirits.”

Teeling is in large part responsible for Irish whiskey’s global revival after breaking the then monopoly controlled by Irish Distillers (producers of Jameson ) by setting up Cooley Distillery in 1987. Teeling sold Cooley, which supplied bulk whiskey to independent bottlers, to Beam Suntory in 2011 for US$100mn and started a similar business in 2015 with Great Northern, while his two sons set up their eponymous Teeling Distillery.

“Jameson, Tullamore and Bushmills are still taking the bulk of the market,” said Teeling “All of the other brands on the shelves [in Russia] that you don’t recognise would be ours.”

Great Northern supplies bulk to four distributors from Russia, the Baltics, Italy and France, who brand, bottle and ship his whiskey into Russia.  In turn, they supply supermarket chains, including Metro, Lenta and Auchan.  Lenta sells the obscure-sounding Shamrose Irish blended whiskey for 1,000 rubles ($13) and Armstrong Irish Whiskey for 1,300 rubles ($17) – well below what the 3,150 rubles ($42) they charge for premium Teeling whiskey.  Metro stocks Kilbeggan, Teeling, Roe & Co, Lambay and even the single malt Pogues Whiskey, made by independent West Cork Distillers.

The popularity of Irish whiskey was much in evidence in Moscow over the past week for the annual weekly St Patrick’s Festival even if the wild parade was canned.  Bushmills was the sponsor for the Irish film festival and hundreds of bottles were made available for tastings at the Karo cinema on Noivy Arbat in Moscow and the KARO 9 Varshavskiy Express cinema in St Petersburg.

Russia, which has kept its bars and restaurants open throughout the pandemic, was one of the few countries in Europe where it was possible to drown the shamrock during their St Patrick’s Day celebrations.  Brian McElduff, the Irish Ambassador to Russia, has been a keen advocate of the spirit since taking up his post and is believed to have set up a whiskey tasting club.

Such is the increased clamour for Irish whiskey that Russians are now making it for themselves. Praskoveya Winery, which was stablished in 1898 in the Stavropol region, started to develop its own Irish Praskoveyskiy Whiskey in 2009 using strict Irish production methods. The winery, which has producing its own cogac, produces 3-year-old, 5-year-old and 6-year-old whiskey that has been compared in taste to Jameson.

As well as the legitimately-made whiskey, there is a huge problem in Russia and across Eastern Europe with fake Irish whiskey brands.  “As Irish whiskey grows faster, you are always going to have rip-off merchants but they seem to be getting on top of it – including Irish-styled whiskey coming out of the Ukraine and for the Russian market,” said Teeling.

The Irish Whiskey Association (IWA) last year came across six fake Irish whiskey brands in Russia, three of which were produced in Belarus. It has sought to have the products taken off shelves in Russia and has lobbied the European Union to negotiate intellectual property and geographical indication (GI) protection with the Kremlin. Cease-and-desist letters have been issued to various companies and retailers selling the fake Irish whiskey, leading to them no longer being sold.

But William Lavelle, head of the IWA, argues these infringing brands are actually “a massive endorsement” of the real product.  “We have seen people who buy cheap or knock-off Irish whiskey move up the chain as they develop a taste for it,” Lavelle told bne IntelliNews in an interview.

Russians first got a taste of uisce beatha - the Irish for water of life later anglicised by the Normans to whiskey - in the 1980s when Aer Rianta, a pioneer investor in the perestroika era, set up the country’s first duty-free shops in a joint venture with Aeroflot.

Lavelle believes whiskey sales are taking off in the region at the expense of Scotch and bourbon because more people are realising that the Irish drink is a smoother and slightly sweeter spirit. “It’s down to the multiple distillation and it’s a much more palatable drink straight, on the rocks or in cocktails,” he said.

The IWA and Teeling said the growth of Irish whiskey is being recorded right across Central and Eastern Europe and even in Central Asia. Russia, Poland, Czech and Ukraine have led the way in terms of sales growth of just over 20% across the region over the last decade, according to the IWA. In 2019, over additional 350,000 cases were sold across Central and Eastern Europe, spread across multiple brands. This accounted for 31% of all growth in 2019, confirming the region as a real counterbalance to the US in terms of Irish whiskey sales and growth.

Teeling said Great Northern and his sons are selling via their distributors into the predominantly Muslim “Stan” countries of Uzbekistan, Kazakhstan and Tajikistan.  “Uzbekistan was buying some of our high-end Cooley whiskey and now is buying Teeling whiskey for the oil workers coming off the Caspian,” said Teeling. “We have one customer I deal with whose family are Kazakh Armenians and they are shipping our whiskey into most of the Stans."

The most remarkable growth of any Irish whiskey in the region has been recorded by Conor McGregor’s Proper No.Twelve due to his profile and the popularity of MMA in the region. McGregor flaunted his whiskey during a press tour of Moscow in October 2019 when media – including this journalist – waited for two and half hours before the fighter turned up. Hundreds of media packed into the historic Central Telegraph building while thousands gathered outside on Tverskaya street and started chasing his limousine when McGregor left.

Teeling himself has witnessed the appeal in Eastern Europe of McGregor, who was even a personal guest of President Vladimir Putin in Moscow during the 2018 World Cup.

“I met four businessmen at the Teeling distillery in Dublin one Sunday, who had flown over from Minsk on Ryanair simply to buy as many bottles as Proper No.Twelve as possible,” recalled Teeling. “It’s a matter of taste so they were in drinking our whiskey with us at Teeling, which is, of course, much more expensive than McGregor’s.”

US and Chinese slowdown will tip the world into recession, says IIF
3 days ago
NEO: Rising in the East, Setting in the West: Russia strengthens trade with Global East
4 days ago
Stagflation fears continue to rise
4 days ago
The economics of herding in Mongolia
6 days ago
EXPLAINER: how a price cap on Russian oil might work
6 days ago