Russia’s war of aggression in Ukraine gradually impacting the economy 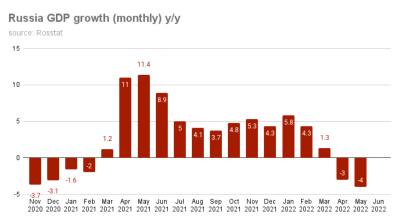 Russia's GDP contracted by 4% in May and the expectation for the full year has been reduced from 15% to 8%. But as the war wears on its affects are showing up in a number of places, according to the latest data release. / bne IntelliNews
By bne IntelliNews July 8, 2022

The effects of the Russian war of aggression are gradually beginning to be seen more widely in the Russian economy.

Rapid inflation has eaten away the purchasing power of Russians and cut consumption. Industrial production has been supported by the military industry, while other production has developed more poorly, the Bank of Finland institute for Emerging Economies (BOFIT) said in its weekly update.

According to the Russian Ministry of Economy's preliminary estimate, the country's GDP shrank by 4% in May from a year earlier (chart). In the June survey by Consensus Economics, the average of Russia's GDP forecasts was -8% for this year and -2% for next year.

Consumption demand has decreased as uncertainty increases and purchasing power weakens. The amount of retail trade in May was 10% lower than a year earlier. Consumer prices rose in Russia in April-May by 17–18% y/y. In April, the average real (ie corrected for price increase) monthly salary of Russians was 7% lower than a year earlier. The unemployment rate has remained historically low and was 3.9% in May, reports BOFIT.

Within the processing industry, the development was again very variable. The production of passenger cars has almost completely stopped: in May, only barely 4,000 cars were manufactured in Russia, while a year earlier the production reached more than 112,000 cars. Also, e.g. the production of railcars and excavators has dropped rapidly. On the other hand, the production of e.g. certain turbines, radio-electronic devices and medicines increased several times in May compared to a year earlier.

“According to the estimate of the Russian economic research institute CMASF, Russian industrial production has contracted more strongly in recent months, if the production of the military industry is not taken into account. CMASF estimates a fall of 4% for May. In order to secure the operation of the military and the military industry, this week the Duma approved a law amendment, based on which the Russian government can, if necessary, target companies with special measures. Companies can be obliged, for example, to manufacture goods for the army, repair army equipment or manage the army's transport,” BOFIT said.