Russia’s Watcom shopping index recovers some ground in December, still down by half on previous year 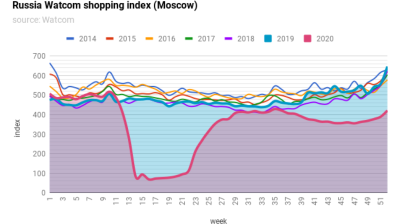 Russia’s Watcom shopping index, which measures foot traffic in Moscow’s major shopping malls in real time, recovered some of the ground lost after the second wave of the coronavirus (COVID-19) pandemic emerged in the autumn, but still finished the year well down on the previous year.

As the chart clearly shows, foot traffic in the Russian capital’s major malls, recorded using 3D camera technology, bounced back in the summer after the first lockdown was ended, recovering all the ground lost in the crisis. However, as the second wave gathered pace in September the index began to fall.

But the drop was limited as the authorities decided to forego a second lockdown because the damage it was doing to the economy. Foot traffic fell anyway as many Muscovites decided to self-isolate anyway.

In November the fall in traffic plateaued out as the holiday shopping season built up some momentum, and the index is clearly recovering.

Going into 2021 and the index is expected to continue to gather momentum, as Russia has started the roll-out of its mass vaccination programme, using the home-grown Sputnik V vaccine. As of January 12 the authorities claim that over 1.5mn have been vaccinated and have reported that infection rates have begun to fall. Retailers are expecting a large surge as a year’s worth of pent-up demand is released, but uncertainty remains very high.

The volume of retail trade in November was 3.1% lower than in the same period of the previous year, i.e. slightly deeper than in late summer and throughout the autumn (when the decline was between 1% and 2%).

The slump in November supports previous estimates that in previous months, household consumption demand included purchases to prepare for the second wave of the coronavirus.

Russian industry falls by 2.9% y/y in 2020.
ING: Russian corporates are back to foreign debt redemption in 2020
INTERVIEW: “The weekend’s protests were the Russian people's, not the opposition’s” – Maxim Reznik