Russia, Turkey sign deal to use own currencies in payments and settlements 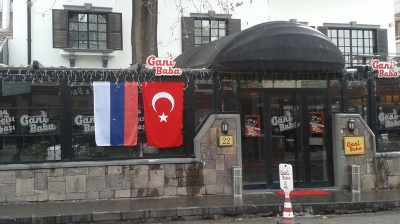 Russian and Turkish flags outside a restaurant in Ankara.
By bne IntelliNews October 8, 2019

Russian Finance Minister Anton Siluanov has inked an agreement with Turkey on using national currencies in payments and settlements between the two countries, the Russian finance ministry said on October 9.

Russia, Turkey and Iran have been very active of late in taking steps to replace the dollar in transactions wherever possible, with the strategy seen as reducing potential exposure to US sanctions and global financial and economic policy as set by Washington.

The aim of the new agreement, signed on October 4, is a gradual switchover to using the ruble (RUB) and Turkish lira (TRY) in mutual settlements, the finance ministry said.

The agreement envisages connecting Turkish banks and companies to the Russian version of the Swift payment system. It also foresees an enhancing of infrastructure in Turkey that would enable the use of the Russian MIR cards. They were designed by Moscow as an alternative to MasterCard and Visa.

Economics editor at RBC Ivan Tkachev said that in 2018 21% of Russia-Turkey trade was settled in rubles and 65% in dollars, and observed on Twitter: “Interesting that TRY’s share in Russia-Turkey trade was only ~1% in 2018, so it’s mainly about switching to RUB. 83% of bilateral trade is Russian exports, so it’s rather about Russia getting its own Rubles for goods sent to Turkey.”

He noted that the initial news on the agreement being prepared was accidentally leaked via a document found dumped in a landfill. It was, he added, only the second such agreement for Russia following a June memorandum with China.

Global chief economist at Renaissance Capital, Charlie Robertson, said the volatility of the lira meant that the ruble might be preferred in Turkey-Russia trade.