Russian agriculture production surprises with a tumble of 10% in August 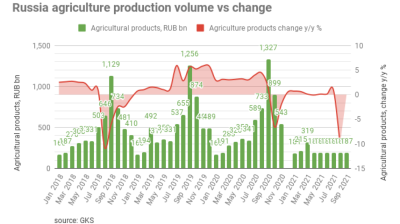 At a time of soaring food prices, Russia's agricultural production tumbled by 10% in August y/y.
By bne IntelliNews October 8, 2021

Analysts are chewing through RosStat’s recent release of a detailed breakdown of Russia’s production, and the big surprise was that agricultural production tumbled by 10.1% year on year in August.

The state has poured billions of dollars into developing the agricultural sector in recent years as part of its efforts to create food products that were previously imported from the EU but are now unavailable due to the tit-for-tat sanctions Russia imposed on European agri-business in 2014 following the annexation of the Crimea.

That has led to both a boom in grain production, where Russia is now the world’s biggest exporter, and the appearance of a food processing industry making products that were almost entirely imported before the sanctions like cheese.

Agricultural growth has been one of the motors of Russia's economy in recent years and the export of grain that earned some $25bn in 2020 has overtaken arms exports to become Russia’s second-biggest export product after raw materials. But this year’s slowdown came as a surprise.

“The starkest number in the August first-tier data was a 10% y/y drop in agri output, which stands out among more or less expansion elsewhere since 2Q21,” Alexander Isakov, chief economist at VTB Capital (VTBC) said in a note. “The contraction has a meaningful cross-read beyond agriculture itself (~4% GVA) as food price pressures are a crucial piece of the disinflation puzzle – and thus of the broader outlook for post-recovery economics.”

Isakov says the fall can be blamed on grain production as wheat grinding fell -13.1% YTD y/y), but despite the contraction, he believes that the price effects of the August reading will prove to be capped for two reasons.

“First, the key driver of domestic wheat prices is global prices, rather than domestic production levels, and this link has been loosened by the introduction of the grain price damper,” Isakov said.

“Second, and this is somewhat secondary, wheat production is still projected by MinAgriculture to exceed domestic consumption (in a broad sense), as wheat producers expect output for the full 2021 to reach 75mn tonnes, which, despite a -12.7% y/y decline, is high by historical standards,” he added.

As for the rest of the RosStat release: economic activity elsewhere was mixed in August. Output indicators fell short of expectations as the post-crisis bounce-back is clearly running out of steam as the low base effects from last year’s lockdown wear off.

The demand and labour market data were more upbeat as consumption returns as an economic driver thanks to real incomes going back into the black. Russia’s latest PMI results for manufacturing and services also show that the economy is holding its own and expanding mildly.

“We keep our forecast for FY21F GDP intact at +4.3% y/y, as economic activity stays healthy in the remainder of 2021: household demand and household-related output receives a boost from social payments, while OPEC+ easing restrictions will support mining & quarrying and petroleum-related manufacturing, in our view,” Isakov concluded.