Russian assets sees a all-time record $1.4bn of outflows in a week 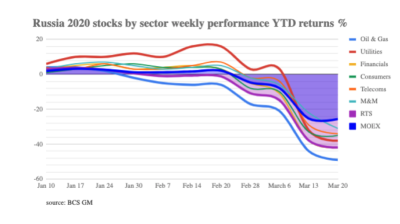 Russian assets saw and all time record of $1.4bn of outflows in a week
By bne IntelliNews March 20, 2020

Russian assets saw an all-time record $1.4bn outflows from investors from its combined equity and bond securities in the week ending March 18 compared to an outflow of $590mn the week before, according to EPFR Global, which tracks investment flows.

“A wave of outflows of historic size hit all sorts of EM funds. Russia-dedicated funds reported $238mn of outflows led by active funds, with country funds managed by BNP Paribas and HSBC accounting for the majority,” Vyacheslav Smolyaninov, chief strategist and deputy head of research at BSC Global Markets, said in a note.

Markets were in free fall in the last two weeks after the coronavirus (COVID-19) spread from Asia and rocked countries around the world. To add to the pain, oil prices slumped again to under $25, their lowest level in almost two decades as demand evaporated as one country after another went into lockdown.

The dollar-denominated Russia Trading System (RTS) sank to a low of 832 during the week, half of its January high of just over 1,600. All the sectors have sold off, with oil and gas taking the brunt of the selling, down by 49% YTD as of March 20.

Russia-dedicated equity funds sold c$240mn, ten times the outflow from the week before and the third week of selling. The combined EM equity funds that include Russia saw an outflow of c$640mn, which was three times more than the previous week, reports BCS GM, the worst week of selling since August 2011.

Russia has not been singled out, as there were outflows from all global equity funds, which amounted to $5.9bn in the last week. But that still made the combined outflows figure for Russian stocks one of the worst in history: the total of $640mn of outflows is the worst since the US sovereign rating downgrade in August 2011.

“Remarkably, there were even larger outflows in January 2008, when it became clear that the US was heading for a recession – history does rhyme in fund flows,” says Smolyaninov. “We believe the flow momentum should start stabilising in the coming weeks, with huge ongoing volatility in prices, but we reiterate our negative short-term call for now.”

Bond funds were also hit, but not as badly, thanks to Russia’s rock solid fundamentals. Russia-dedicated bond funds lost $20mn in the same period to March 18, which was twice the $10mn they had lost a week earlier. The combined bond funds saw c$760mn of outflows in the last week vs the $380mn that left the previous week.

“The week for EM bond funds was unprecedented in terms of absolute outflows – GEM bond funds lost $12.3bn of investor money, c3% of assets,” says Smolyaninov. “In relative terms, it was the third worst week in history, trailing only two weeks in October 2008 (outflows of 3-4% of AUM) when Lehman collapsed and triggered a global flight to liquidity. Effectively, the combined flows figure for Russian bonds was also a record negative… We see more outflows ahead and remain tactically negative on bonds too.”