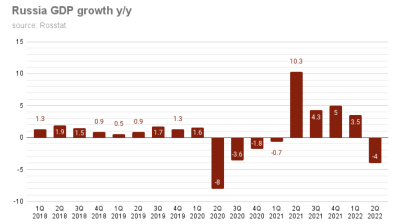 Russian GDP contracted by 4% year on year in the second quarter of 2022, according to RosStat (chart), consistent with a fall of 6% in seasonally adjusted quarter-on-quarter terms and in keeping with the growing consensus that the contraction of the economy this year is going to be much milder than previously anticipated.

“A much better performance than analysts had expected and than had seemed likely a few months ago,” said Liam Peach, an emerging market economist with Capital Economics. “There have been signs of stabilisation in many sectors over the past month or two but we don’t expect the downturn to bottom out until Q2 2023 and think the economy will stagnate at best thereafter.”

The International Monetary Fund (IMF) recently improved its forecast this year from -8% to -6% and the Central Bank of Russia (CBR) monthly macroeconomic survey of independent professional economists also came out with an improved forecast of a 6% contraction. The CBR itself was even more optimistic, revising its own forecast to a 5% contraction. In March at the start of the war in Ukraine economists were forecasting between 8% and 15% contraction, with a few predicting even more dramatic falls than that.

Russia’s economy has been cushioned from the worst by the soaring commodity prices and the ineffectiveness of attempts to sanction its oil trade. That has led to a record current account surplus of $166bn in the first seven months of this year – triple the amount for the same period last year. At the same time, inflation peaked in April and has been falling steadily since, allowing the CBR to make four rate cuts since it hiked the prime interest rates to 20% on February 28 only days after the war started.

“The downturn could have been much deeper but the central bank took immediate measures to prevent a financial crisis from taking hold. It also seems that the resilience of Russia’s energy sector cushioned the impact of Western sanctions,” said Peach.

Nevertheless, the economy is reeling from the shock of sanctions, but the effect on various sectors has been very different. The car sector, for example, has completely collapsed, whereas the latest service PMI result shows that sector has returned to growth on the back of improving optimism amongst the population.

Monthly activity figures show that mining production fell by only 2% q/q in Q2 as oil production bounced back strongly from an initial 8% month-on-month slump in April, Capital Economics reports.

“Sanctions had a larger impact in other areas. Manufacturing output fell 4% q/q. Production in sectors most dependent on foreign inputs slumped more than 10% due to problems after being cut out of foreign markets. Consumer demand weakened sharply too. Retail sales slumped 11% q/q (10% y/y) as Russia suffered from a severe inflation shock in March, confidence collapsed and monetary conditions tightened,” Peach commented.

Despite the good results, economists widely anticipate growth to slow going forward once the high commodity prices return to normal and the effect of the sanctions on imported technology take their toll. Even the CBR predicted that long-term growth from about 2024 onwards will be reduced to around 1.5%, and for the economy to stagnate.

“Q3 is likely to be another weak quarter, albeit a smaller contraction than in Q2. The downturns in retail sales and manufacturing have softened, inflation has eased and monetary conditions have loosened. Even so, the economy still faces severe headwinds, including limited access to Western technology and a looming ban on the provision of insurance for shipping Russian oil, which we think will cause output to fall 10% next year. Overall, we don’t expect GDP to bottom out for another year or so,” said Peach.