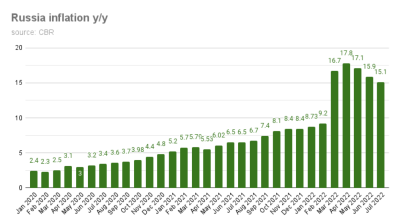 Russia is the only country in Europe where inflation and central bank interest rates are falling. / bne IntelliNews
By bne IntelliNews August 10, 2022

Russia is now the only country in Europe where inflation is falling thanks to the determined action by the Central Bank of Russia (CBR) that has been tightening monetary policy since March last year, when it hiked the key interest rate by 25 basis points from 4.25% to 4.5% — the first rate hike since December 2018. The central bank then also put in an emergency hike to 20% on February 28, only days after the invasion of Ukraine.

However, the news was not all good as Russia was suffering from deep deflationary pressure in some fruit and vegetable categories, leading economists to say that inflation will start to rise again once autumn arrives.

“[The results] seems good, but all the decline is down to a hyper-seasonal fruit & veg's -11% fall m/m — twice the normal amount for the month that won’t last — inflation will rebound into autumn as lending growth out-paces supply,” Bloomberg’s economic editor Alexander Isakov said in a tweet.

“Russia’s month-on-month deflation deepened in July as consumer prices fell by a larger-than-expected 0.4% m/m (in y/y terms, the headline rate eased to 15.1%). The disinflationary impact of the strong ruble is likely to fade but with consumer demand so weak we think the headline inflation rate will fall towards 12% y/y by year-end. We think this will prompt a further 100bp of rate cuts, to 7%, later this year,” Capital Economics said in a note.

On a monthly basis, consumer prices declined by 0.39%, extending a 0.35% fall in June and falling more than forecasts of a 0.2% decrease. On the other hand, core consumer prices kept soaring faster than headline inflation, jumping 18.4% over July of 2021, reported Capital Economics.

Russia’s industrial output decline slows to only 0.1% in August
1 day ago
Poll shows Putin's popularity took hit in September but remained as high as 77%
1 day ago
Russia on track to have a record-smashing grain harvest
3 days ago
Bosnia posts annual CPI inflation of 16.8% y/y in August
4 days ago
IMF sees Romania’s economy growing by 4.8% in 2022, analysts are even more bullish
4 days ago