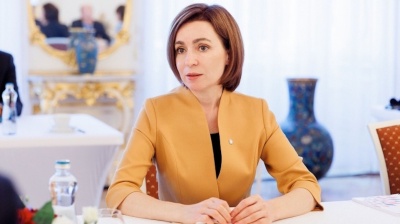 Moldovan President Maia Sandu commented that the country may seek membership of “a larger defence alliance”. / presedinte.md
By Iulian Ernst in Bucharest January 25, 2023

Two influential Russian lawmakers warned on January 24 that Moldova considering Nato membership “may lead to its destruction”, after another Russian senator said the day before that President Maia Sandu risks repeating the "suicidal policy" of Ukrainian President Volodymyr Zelenskiy.

The statements were prompted by Moldovan President Maia Sandu telling Politico that her country may seek membership of “a larger defence alliance” in order to consolidate its security. Moscow’s vehement objection to Ukraine joining Nato was one of the reasons for Russia’s invasion of Ukraine last year. Like Ukraine, Moscow considers Moldova to be part of its sphere of influence.

Sandu and other members of the pro-EU authorities have emphasised recently that Moldova’s military neutrality, enshrined in its constitution, shouldn’t impede the development of defence capacities.

Moldova lies on Ukraine’s western border, and part of the country is occupied by Russia-backed separatists, making it highly vulnerable to spillovers from the war in the neighbouring country. Several Russian missiles have crossed or crashed onto its territory since the start of the war.

"Usually, we react to actions. Moldova has upset us lately with a series of its decisions," Svetlana Zhurova, a member of President Vladimir Putin's United Russia party and first vice-president of the State Duma Foreign Affairs Committee, told Vedomosti.

The MP said that she is confident that the Russian Ministry of Foreign Affairs "will know how to respond" to Sandu's statements.

Moldova's accession to Nato could lead to the destruction of this state and will be seen by Russia as a threat to its security, said Leonid Kalashnikov, another influential member of the State Duma in Moscow, to Vedomosti.

"If Moldova wants to destroy its own state, this is the best way … If they think that, like Finland or Sweden, secretly, quickly, taking advantage of the situation, they can join Nato and that nothing will happen to them for this in their own country, they should remember something else. The fact that Finland has two official languages and respects its people.”

Kalashnikov went on to refer to the Russia-backed separatist republic of Transnistria within Moldova, as well as the autonomous Gagauzia.

“And they [Moldova] have Gagauzia … and Transnistria, which has a Russian-speaking population and which expressed its will [to unite with Russia] a long time ago, in the early 1990s," Kalashnikov added.

Kalashnikov emphasised that Russia's attitude towards a possible accession of Moldova to Nato will be negative because it represents a "threat to the security" of the Russian Federation.

In the interview with Politico, Sandu said last week that after the invasion of Ukraine, there is a serious discussion in Moldova about the country's ability to defend itself and the possibility of joining a "larger alliance", without naming Nato as such.

“And if we come, at some point, to the conclusion as a nation that we need to change neutrality, this should happen through a democratic process,” she said.

Her comments sparked a backlash within Moldova too, with pro-Russian former president Igor Dodon called Sandu's statement about the option of renouncing Moldova’s neutral status or joining a "larger alliance" "dangerous".

COMMENT: The new Cold War will be different, and not only because of China
INTERVIEW: Helen Rodwell, head of CMS’ corporate practice in CEE
Russian foreign minister speaks of Moldova as the “next Ukraine”

Polish proposed ban on Russian rubber may give the European tyre industry a flat
7 hours ago
Prague to have a new municipal government after record-long negotiations
12 hours ago
Party congresses of Hungarian opposition demonstrate deep divisions
12 hours ago
At least 500 dead after huge earthquake hits Turkey, Syria in early hours
12 hours ago
Turkish minister tells US ambassador ‘Take your dirty hands off Turkey’ as sanctions sparks fly
18 hours ago