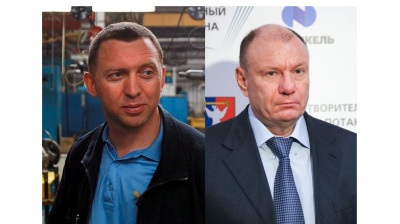 Under threat of new sanctions two of Russia's biggest metals companies -- Norilsk Nickel and RusAl -- may circle their wagons with a merger / wiki
By bne IntelliNews July 6, 2022

Potanin told RBC business portal that he had received a merger proposal from Rusal’s management and confirmed starting negotiations on the matter.

As covered in detail by bne IntelliNews, some Russian metals are deeply embedded in global markets and are hard to sanction. Most recently the US has exempted strategic metals as palladium, rhodium, nickel, titanium, as well as crude aluminium, from a hike of import tariffs.

A bad experience in 2018 means that both Potanin and Deripaska have managed to avoid sanctions until recently. Deripaska and his companies were singled out for sanctions then, but after the price of aluminium soared 40% in a day on the London Metal Exchange (LME) following the news, the US Office of Foreign Assets Control (OFAC) delayed imposing the sanctions and eventually backed off completely, making the sanctions on Deripaska the only ones to have been subsequently dropped since the regime was introduced in 2014.

Even the threat of sanctions against Potanin has already caused turbulence in the price of nickel, which doubled in price in April as the sanctions began to be imposed, breaking all records, and forcing the LME to suspend trading.

Fearful of disrupting a market which supplies a key component for the electric car industry, Potanin manage to avoid sanctions, despite being the richest man in Russia and one of the original 1990s seven oligarch due to his Norilsk Nickel being the major supplier of nickel and palladium for the global automotive industry. However, in June the UK rang the first warning bell by sanctioning the oligarch.

Once bitten, twice shy, Rusal is also not a direct target of the raft of sanctions on Moscow over the Russian invasion of Ukraine this time round, but Oleg Deripaska is sanctioned by the UK and the EU.

bne IntelliNews already suggested that should Norilsk Nickel start experiencing cash problems, it will have to be careful not to flare up his corporate conflict with Deripaska, one of the oldest shareholder spats in Russian corporate history. Potanin has continuously argued for cutting dividends to spend the cash on development because of the ambitious capex programme, especially in the palladium metals field, but Rusal, which relies on Norilsk Nickel’s dividends for its cash flow, strongly opposes the idea.

In 2021 Potanin and Rusal renewed the debate on dividend distribution of Norilsk Nickel, on which Rusal relies for a significant part of its cash flow. Norilsk Nickel previously lowered the dividend but proposed a $2bn buyback.

Instead of prolonging the shareholder agreement that expires at the end of 2022, the two companies could find a way to merge, Potanin suggests. Under the agreement, Norilsk Nickel has to pay at least 60% of EBITDA in dividends given net-debt-to-EBITDA leverage is 1.8x (the minimum payout of $1bn).

“Although no final decisions have been made and there are many different scenarios for the deal, we believe that deleveraging over the past few years, the expiration of the shareholders' agreement in 2022 and increased sanctions risks in Russia set the stage for the merger,” Renaissance Capital commented on June 5.

Potanin is the CEO of Norilsk Nickel and his Interros holds a 35.95% stake in the company, while Deripaska’s Rusal has 26.25% in the company. Another shareholder is Crispian of oligarch Roman Abramovich and Alexander Abramov (about 4% of shares), with 33% free float. The main shareholders of UC Rusal are En+ of Deripaska (56.88%) and SUAL Partners of Victor Vekselberg and Leonard Blavatnik.

“The combined company will have a more balanced basket of metals, in terms of short-term and long-term trends in demand: 75% of metals by revenue according to our calculations (including aluminium, copper, nickel and cobalt) will refer to the global decarbonisation trend, while others, including palladium, will refer to emissions reduction of existing technologies,” the analysts at RenCap estimate.

The Bell and RBC business portal remind that the first merger rumours between Rusal and Norilsk Nickel date back to 2008, when Potanin and another oligarch Mikhail Prokhorov were splitting up heavy industry assets.

Deripaska's UC Rusal bought 25% of Norilsk Nickel from Potanin, but instead of synergy one of the longest corporate conflicts in Russian history emerged.

Fast forward to post-invasion 2022 and Potanin and Deripaska are ready to revisit the idea again, with Potanin arguing to RBC that the main potential synergies could be overlaps of sustainability and green agenda of both Rusal and Norilsk Nickel, as well as joint absorption of state support.

However, he reiterated that "Nornickel still doesn't see any production synergies with UC Rusal” and that essentially the companies would maintain two separate production pipelines, but nevertheless potentially become a "national champion" within the metals and mining arena.

Commenting on the latest sanctions against him by the UK, Potanin argued to RBC that the sanctions “concern me personally, and according to the analysis that we have at Norilsk Nickel to date, they do not affect the company".

He might still be looking at Deripaska's experience of lifting the sanctions from Rusal. "In our view, the experience of SDN's exclusion from the sanctions list and the related Rusal/EN+ business structure could play a key role in a potential merger deal," RenCap analysts wrote.

CEPR's action plan for Ukraine's wartime economy
5 hours ago
Missiles or sabotage: What caused the explosion at the Russian airbase in Crimea?
3 days ago
Population decline to take Emerging Europe back to the early 20th century
3 days ago
Czech government remains colour blind on green issues
3 days ago
Poland ups the ante in feud with Brussels over judiciary reforms
4 days ago