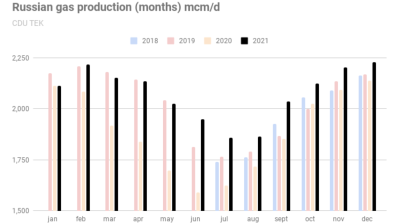 CDU TEK has published Russia’s oil and gas production statistics for December 2021 that show oil output was well up on 2020 but still lagging well behind production in 2018 and 2019. The results also show that Russia ended 2021 producing more gas than in any time in the last four years, both in December and for the full year.

Separately, the draw-down of gas in storage in Europe in the first week of the year appears to have slowed and is being used at a pace less than at the start of 2021, an unusually cold winter.

Russian oil production was up 3.5% month on month in December to 46.11mn tonnes in absolute terms, reports CDU TEK as cited by BCS GM. In daily terms, it increased only 0.1% m/m to 10.86mn barrels per day (bpd).

Novatek’s consolidated production was up 2.0% y/y. Rosneft’s gas production decreased 4.1% y/y. At Surgutneftegas, production rose by 7.9% y/y, while at Lukoil it was down 3.6% y/y.

“The data on the production of gas condensate in December is not available yet. If we assume it at 111 kilotonnes per day (November’s level), then the production of oil in December could have been some 10mn bpd, which would be in line with the 10mn bpd Russian OPEC+ quota. In December, OPEC+ production grew an additional 400,000 bpd monthly, while Russia’s quota increased 100,000 bpd monthly. In total, this resulted in a liquids output increase of 2.2% y/y to 10.5mn bpd, on average, for the full year 2021 (523.3mnt),” BCS GM said in a note.

“Gazprom was producing at 1.52 bcm per day in December, which we think might be close to its maximum available capacity. The company highlighted the increased gas demand in Russia, which was the key driver for the growth. In export, Gazprom continued to fulfil contract obligations to European customers, and, we think, is likely to keep its current level of gas production in the first months of 2022 unless there is much warmer weather in both Russia and Europe,” BCS GM added.

Separately, the amount of gas in storage on January 8 was 54.7% of capacity, having fallen from 56% at the start of the year. That was down on the 68.5% in storage as of January 8, 2021, but Europe started the heating season with less gas in storage this year. The chart shows that the rate of fall has been slower than last year thanks to milder weather and the arrival of LNG deliveries from the US in the last three weeks.

However, the rise in temperatures in Europe led to a decrease in Russian gas supplies in the first week of January, Kommersant reports. Pumping through Ukraine almost halved (according to Slovakian Eustream, the average volumes for 1-9 January fell to 54mn cubic metres per day, which is some 55% less than in the previous ten days of December 2021), dropped by a third through the TurkStream, and remained at zero through the Yamal-Europe gas pipeline, VTB Capital (VTBC) reports.

“Gazprom is exporting at a rate below historical levels for the period, but this is in response to the demand from European counterparties, as persistently high gas prices in Europe push consumers to cover gas needs via gas from storages (filled at 54.7% vs. the multi-year average of 67.1%) rather than via additional purchases,” VTBC said in a note. “The price of the day ahead futures for the TTF spot index on the ICE Futures now stands at $992 per 1,000 cubic metres, which is 12% lower than the day before, but still well above last year’s level of $280/kcm. We therefore do not expect a tangible reaction from Gazprom’s shares to the news.”

Currently Europe is on track to finish the heating season at the end of March with gas amounting to at least 12% of storage capacity left – its lowest level in years.

Consumer prices rose 22.5% y/y in November, accelerating from a 21.1% increase in the previous month.

The National Bank of Ukraine will keep the key policy rate unchanged at 25% per annum, the bank stated in a report on December 8.