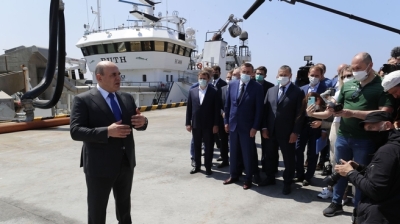 Russian plans to establish an economic zone on a disputed group of islands near Japan, outlined by Russian Prime Minister Mikhail Mishustin on July 26, have drawn an angry response from Tokyo.

Japan refers to the islands as the Northern Territories, while Russia calls them the South Kurils. Because of a conflict over the islands, which the Soviet Union took control of at the end of World War II, the two countries have not yet signed a formal peace agreement.

According to Mishustin, he was going discuss an "unprecedented" set of economic measures aimed at incentivising the islands' development with President Vladimir Putin.

“We discussed with the president of Russia a set of measures that can be taken here in the Kuril Islands to make investment and economic activities more effective. This set of measures is unprecedented,” Mishustin said during a visit to the Yasny fish processing plant, a government statement said.

"This would be interesting... for Japan as well, which could create jobs and work with you if it is interested," he was quoted as saying by RIA news agency.

Ways of improving the islands’ energy supplies with an LNG storage facility as well as investments into wind and solar energy are also being considered.

The Russian foreign ministry swiftly retaliated, summoning Japan's ambassador to impart a “resolute protest in connection with the unfriendly steps taken by official Tokyo in recent days in the context of Japan's territorial claims to our country”, a ministry statement said.

"There is political will on Russia's part to develop good relations with Japan, we value our economic cooperation very much," Peskov said, according to news agency reports.

Dzhabarov also talked of the benefits of economic cooperation on the islands for both countries. "This would benefit both Japan and Russia. This would be better than trying to make the islands part of Japan so that American bases might appear there the next day. The Japanese have never hidden that. They are under the US ‘missile umbrella,’ and these islands would have been handed over for the deployment of US bases,” Dzhabarov said.

The Kuril islands are part of the volcanic ‘Ring of Fire’ around the Pacific ocean. They stretch between Japan’s Hokkaido island to the Russian Kamchatka Peninsula. Japan clams ownership of the southern islands including Iturup, Kunashir and Shikotan, as well as several uninhabited islands. While the main economic activity at present is fishing, there is speculation they could also have offshore oil and gas. They are also strategically useful to Russia, which carries out military drills there.