Russian retail coming back to life, but a full recovery will take longer 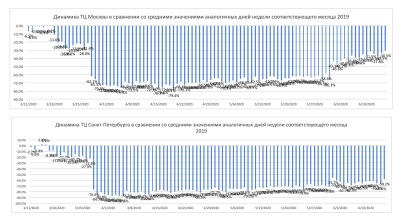 Foot traffic in Russia's largest malls has bounced back as lockdown restrictions are removed, but it will take a long time for retail turnover to return to pre-crisis levels
By bne IntelliNews June 16, 2020

Moscow Mayor Sergey Sobyanin imposed some of the toughest stay-at-home restrictions in Europe on March 30 after finally admitting the infections from the virus were running unchecked in the capital – the epicentre of Russia’s epidemic.

Residents were confined to their apartments and only allowed out to buy food (from a store within 100m of their residences), walk the dog or take out the rubbish. A system of QR codes was introduced to police the measures and transgressors faced heavy fines.

However, the infection rate in Moscow has passed peak and Sobyanin relaxed the regime at the start of last week. Foot traffic in the malls immediately picked up.

While foot traffic in malls plummeted after March 30, down some 70%-80% in the first week of the lockdown, it improved about four weeks ago after new rules were introduced to allow people to go for walks on a timed rotation depending on region. That increased the foot traffic to a c.60% fall year on year in Moscow (top chart).

A similar pattern has been seen in Russia’s “other” capital, St Petersburg, the second-largest city in the country, although its residents have been much more cautious and remained at home (bottom chart). Foot traffic there remained down c.70% for most of the lockdown period and only recovered slightly into the 60s three weeks ago.

However, in the last week the foot traffic increased to the point where it was down by 30%-35% in Moscow, measuring 30.5% on Monday, June 15. On the same day the foot traffic decrease in St Petersburg broke below 60 for the first time to reach a 58.2% decline y/y. 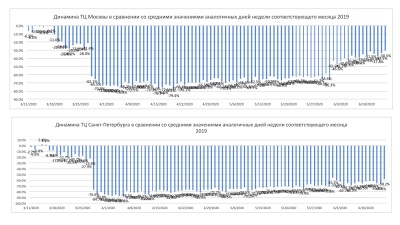 Retail is main victim of the coronacrisis

The Russian consumer has been the biggest victim of the pandemic as seen in the most recent statistical data that shows large contractions in retail sales, services and residential construction.

Rosstat reported that retail sales were down a massive 23.4% y/y in April, the latest data available. The fall in retail was worse than the 17.7% consensus expectation by analysts. The drop comprised a 9.3% y/y decline in food retail and a 36.7% y/y collapse in durable goods.

Although foot traffic is now recovering, the overall retail trade turnover is likely to take months, or longer, to recover to pre-crisis levels. In addition to restrictions on going out, the spending power of the Russian consumer has been hurt.

A pickup in inflation that was accompanied by ruble devaluation and a rise in unemployment has been the prime driver behind the drop in real income. Unemployment almost doubled in May to 5.8%, from 4.7 in March. At the same time, real incomes have fallen and returned to those during the the six years of stagnation the country has been suffering from. BCS GM forecast real disposable income to decrease by 4% y/y this year and retail sales to drop by 5.4% y/y in 2020.

Russian maybe going back to the shops and parks, but some have questioned the wisdom of easing the lockdown. Sobyanin himself was reluctant to lift the restrictions, which he wanted to extend into July. However, his hand was forced after meeting Russian President Vladimir Putin last weekend, as the Kremlin is worried about the impact on the wider economy and also is preparing for a key referendum that will remove the term limits from Putin’s presidency so he can stay in office until 2036.

The infection rate in Moscow has passed peak, but it continues to climb in the rest of Russia, as the chart below shows. (Red: new cases Moscow, Blue: new cases in the regions, Yellow: new cases for all Russia.)

Over the past 24 hours 193 people have died, bringing the total death toll to 7,284 – a rate considerably lower than that in many other countries hit hard by the pandemic.

The mood in the rest of the country is mixed. The annual Victory Day parade was postponed from May 9 to June 24 because of the epidemic; however, so far 13 regions from a total of 85 have decided not to participate because of public health concerns. 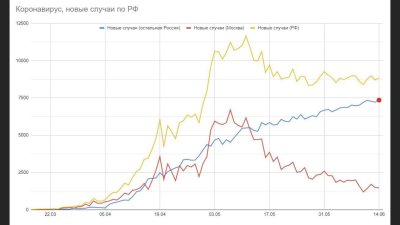