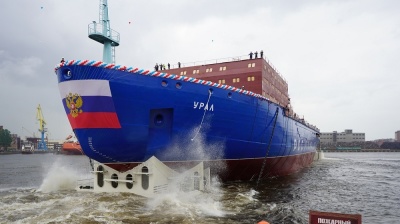 Russian state nuclear power agency Rosatom is planning a massive expansion in the maritime shipping market with an investment of up to $7bn, Vedomosti daily reported on November 21 citing the presentation of the state corporation to banks.

As analysed by bne IntelliNews, the state-owned Rosatom is on a tear and the export of nuclear technology is already one of Russia’s biggest export earners. The company operates 35 nuclear power stations in Russia that produce 28GW of power or 18% of domestic energy needs, and it is actively exporting its nuclear technology to countries around the world.

Reportedly, now Rosatom aims to become one of the top 15 maritime shippers in the world, transporting cargo from South-East Asia to Europe via the Arctic Northern Sea route, competing with alternative routes on the Pacific and Indian oceans, the Suez channel, and the Mediterranean.

Rostatom's subsidiary Atomflot is the only operator of nuclear icebreakers in Russia that are necessary to navigate the Northern Sea Route. The company currently operates three nuclear icebreakers, but another two have already been commissioned. Currently the company is not involved in shipping, but is only accompanying shipments (331 vessels carrying 12.7mn tonnes in 2018).

Rosatom estimates that the throughput of the Northern Sea Route amounts to 1mn tonnes annually, out of which 570mn tonnes are containers. The agency could take 72mn tonnes (43mn tonnes in containers) share.

This would be comparable to annual throughput of Maersk shipping major. However, the analysts surveyed by Vedomosti remind that the timing gains on the Northern Sea Route could be compromised by high cost of icebreaker expedition.

Reportedly, Rosatom expects the revenues from shipping to soar from $700mn in 2023 to $5.6bn in 2026. The President Vladimir Putin has set a goal to bring the transportation on the Northern Sea Route to 80mn tonnes by 2024 from 20mn tonnes in 2018.