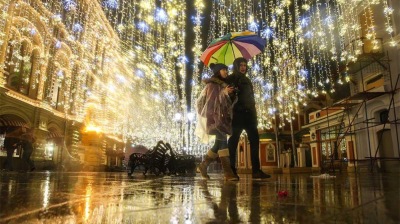 The sales of artificial Christmas trees and karaoke microphones have exploded ahead of the holiday season after the state ordered bars and clubs to close early due to the coronavirus pandemic
By bne IntelliNews November 22, 2020

Russians are getting ready to celebrate a coronavirus (COVID-19) Christmas at home and have been laying in supplies for the holiday season that saw artificial Christmas tree orders on Russia’s biggest e-commerce site Wildberries soar 23-fold, while the sales of portable karaoke microphones were up a whopping a 95%, the company said, as cited by Russia Business Today.

Coronavirus infection rates have soared as a second wave is running almost out of control. Russia reported almost 25,000 new cases a day last week – more than double the peak infection rate in the first wave of the pandemic in May.

However, the government has been reluctant to impose a second lockdown due to the economic damage it does and has instead beefed up existing restrictions and enforced them more vigorously in an effect to combat the spread of the virus.

While bars and restaurants remain open, clearly Russians are intending to stay home over the holidays and celebrate with friends and family at home.

Wildberries reported a two-fold increase in demand for goods for home holidays compared to October after studying its recent purchase trends.

“Between November 6-12, compared to the same week in October, the number of orders of goods for home holidays on Wildberries increased by 148%. The most dynamic growth in demand was for artificial Christmas trees (an increase in the number of orders by almost 23 times) and Christmas tree decorations (by 7 times in the Moscow region), the number of orders for holiday trees increased by 22 times, and in St. Petersburg by 14 times. The most popular models to order are the ones that cost between RUB8,000 and RUB15,000 [$105 and $197], and 150 to 180 centimetres in height,” the company said as cited by RBN.

Partygoers are clearly going to do a lot of singing, as in addition to a doubling in the sales of portable karaoke microphones, the sales of music speakers were up by 84% and acoustic systems in general saw sales increase by 83% in a week.

Wildberries speculated that the sudden increase in the sale of party accessories followed the state’s decision to limit the opening hours of clubs and bars to 11pm just ahead of the holidays due to the coronavirus.

As a largely Orthodox Christian country, Russians do not celebrate Christmas on December 25 as they still follow the Georgian calendar, which has Christmas on January 7, followed by “Old New Year” on January 14. Moreover, Christmas is a less significant holiday than Easter, so the main winter holiday is New Year’s Even that is celebrated with a Christmas tree and present giving on December 31.