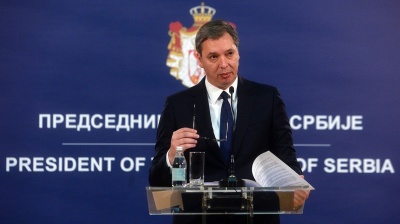 Vucic’s statement, made following a meeting of the security council, came after a video showing a meeting between a man later identified as Lt. Col. Georgy Kleban, a former assistant military attaché at Russia’s embassy in Belgrade, and a Serbian retired army officer, identified as Z.K.

This spy scandal was surprising considering Serbia’s very friendly relations with Russia. Vucic said in his statement he was certain that Russia’s President Vladimir Putin was not involved.

“We shall not change our politics towards Russia, we perceive it as a brotherly land,” Vucic said.

He added that he could not find a logic in the spy affair due to the extremely warm relations between the two states. However, Vucic also added the country will strengthen its army.

“This is a land of libertarian people and we have not agreed and never will agree to be ruled by someone else,” Vucic said.

Euronews quoted Maria Zakharova, a spokeswoman for Russia’s foreign ministry, as saying at a news briefing in Moscow that the footage was “a provocation” designed to create “a certain impression”, adding that Russia has many times noticed similar provocations ahead of high-level meetings between Russian and foreign officials. Vucic is due to visit Moscow and meet Putin on December 4.

The spy scandal coincided with rumours that Belgrade might acquire Russian air defence systems that would give Putin a serious advantage in the region. At the time, Vucic said that Serbia cannot afford to buy these systems unless they are gifted.

Meanwhile, in Bulgaria – Serbia’s neighbour that also has traditionally friendly relations with Moscow – a spy scandal erupted few months earlier. The Bulgarian prosecution arrested Nikolai Malinov, the head of the Russophile National Movement in Bulgaria, and accused him of spying for Russia. Malinov became the first person to be formally charged with espionage in Bulgaria since 1978.

Sofia also expelled a Russian diplomat who was allegedly also involved in espionage, and refused to issue a visa to an incoming defence attaché at the Russian embassy due to a negative opinion provided by one of the bodies in charge of the procedure for issuing long-term visas.

Meanwhile, the prosecution in Bulgaria has banned Russian businessman Konstantin Malofeev and former KGB general Leonid Reshetnikov from entering the country for 10 years. It claimed to have found data on financial transactions from two international organisations to Malinov, and that the funds were used for activities threatening Bulgaria’s national security.