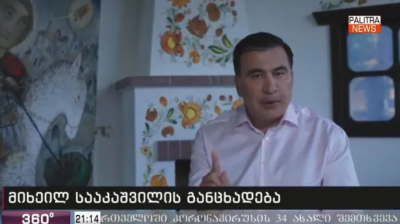 In a video statement, Saakashvili said he wanted to be PM for two years, which would "be enough to pull the country out of the swamp".
By Iulian Ernst in Bucharest September 8, 2020

The prevailing wisdom right now is that Georgia’s main opposition party United National Movement (UNM) and its coalition of smaller parties Strength is in Unity—United Opposition has scored a terrible own goal in naming the polarising former president and self-exiled Mikheil Saakashvili as their candidate for prime minister ahead of the October 31 parliamentary election.

The UNM took the decision in an effort to strengthen its position as the main challenger to ruling party Georgian Dream (GD). It apparently wants to galvanise voters that might be considering backing a more moderate opposition party but it would appear to mean abandoning any plan for a broader pre-electoral coalition in favour of an "all or nothing" strategy perhaps better suited to a presidential knockout contest.

Following the Rose Revolution, the UNM ruled Georgia from 2004 to 2012. But GD came to power very much because of the deep unpopularity that Saakashvili had generated by the end of his time in power and the former president’s fierce rival—GD’s chairman, the billionaire oligarch and ex-PM Bidzina Ivanishvili—might very well be thrilled to see UNM put forward such a divisive candidate.

“Saakashvili’s nomination is a bad sign for the opposition,” Kornely Kakachia, head of Tbilisi think tank Georgian Institute of Politics, told Eurasianet on September 8. “Georgia needs a consensus leader to challenge GD, not someone divisive like him.”

“The more Saakashvili gets involved in Georgian affairs, “the more Bidzina Ivanishvili benefits,” wrote analyst Dmitry Moniava in a commentary on RFE/RL. “Everyone says this: Saakashvili’s friends, his enemies, and neutral commentators. But he is like a boxer who has been defeated many times who still wants to show that he is on top, racing back to the past and dreaming of a rematch in the same ring, with the same fans.”

Grigol Vashadze, who was personally appointed by Saakashvili as his successor as UNM chairman and as the party’s presidential candidate in 2018, announced the plan to put the former president on the ballot at a press conference in Tbilisi on September 7.

In the 2018 presidential poll, Vashadze came close to defeating the candidate backed by GD, Salome Zourabichvili. However, Vashadze is a less controversial politician than Saakashvili—a wanted man in Georgia but who in May was appointed head of Ukraine’s National Reforms Council having served for a time as governor of Odessa—and given that the runoff vote in the contest for president is a head to head affair, voters opposed to Zourabichvili and GD were left with no choice but to support him.

“I will be the prime minister not for a full term, but for a maximum of 2 years,” Saakashvili said in a video statement.

“These two years will be enough to pull the country out of the swamp and move forward very quickly. I am sure of that," Saakashvili said.

Saakashvili apologised once more for the mistakes made in the past and asked for a chance to correct them.

The chance of Saakashvili getting a chance to correct his errors are broadly seen as rather slim, however.

“The prospect of Mikheil Saakashvili’s prime ministership looks more uncertain than the prospects of other candidates,” OC Media wrote in a comment on the former president’s intentions.

Saakashvili serves as the honorary president of UNM, but remains a fugitive from Georgian justice. GD officials are making jokes about the situation, basically welcoming Saakashvili into jail. But things would change in the event of UNM causing a major upset in the general election. Given that GD is riding a timely new wave of population thanks to the government’s well received management of Georgia’s coronavirus (COVID-19) crisis, however, that is difficult to imagine as things stand.

Saakashvili’s announced return generates uncertain political benefits for the opposition as a whole: the move may generate momentum among UNM’s supporters and may strengthen UNM’s position as the driving opposition force, but it also increases the radical profile of the party. A recent poll showed UNM with the highest negative rating (29%) among the political parties, followed by GD (25%).

The UNM is thus seemingly aiming at forming, or forcing, a post-electoral coalition where it would play a dominant role since the prospect of a pre-electoral agreement with other opposition parties has just been undermined by its nomination of Saakashvili as its candidate for PM.

The move is likely to put an end to the development of the fragile and shaky opposition coalition pact sketched out in August, which agreed to appoint joint majoritarian candidates in Tbilisi. The coalition has appointed some candidates that are vocally against Saakashvili, such as Irakli Okruashvili. But the future of the coalition already looked doomed and it remaining in limbo would not be a major loss for the opposition.

The latest polls show that the UNM and its coalition of small parties, Strength is in Unity—United Opposition, will not be able to achieve a parliamentary majority. It seems that they would need the support of the other opposition parties, among which European Georgia is the biggest and the most natural ally of UNM.

UNM ranked second with potential voters, with 16%, in an International Republican Institute poll conducted between June 4 and July 2. Georgian Dream led the survey with 33%.

On 14 August, David Bakradze, one of the leaders of European Georgia, said it would be unacceptable for their party to enter any coalition government with Saakashvili or former ministers Ivane (Vano) Merabishvili and Zurab Adeishvili.

Strength is in Unity—United Opposition was conceived as a united front of the opposition, but it has suffered internal disagreements. The New Georgia and Law and Justice parties recently made for the exit.

CAUCASUS BLOG : What can Biden offer the Caucasus and Stans, all but forgotten about by Trump?
Private finance mobilised by development banks up 9% to $175bn in 2019
LONG READ: The oligarch problem