Saakashvili says Russia "way ahead" of Ukraine in making reforms 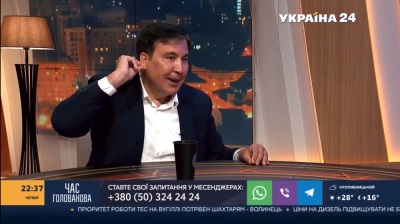 Former Georgian president and recently appointed head of Ukraine’s Reform Committee Mikheil Saakashvili said that Russia was “way ahead” of Ukraine in many key reforms. / Ukraine 24
By bne IntelliNews June 29, 2020

In remarkably candid comments, former Georgian president and recently appointed head of Ukraine’s Reform Committee Mikheil Saakashvili said that Russia was “way ahead” of Ukraine in many key reforms.

“Russia has lots of things we are trying to mend in Ukraine, and they are solved [in Russia] much more quickly and more successfully than here,” Saakashvili said in an interview with the Ukraine 24 broadcaster.

“Russia has gone far ahead of Ukraine in deregulation” Saakashvili added. “And in the tax system, they are far ahead. Actually, they listen to business much more than we do… [The Russians] are defeating us on the front of reforms.”

Ukraine observers believe that Saakashvili’s outspoken comments are designed to shame Ukrainian politicians into action. The recent difficulty Zelenskiy’s government had putting in place the so-called anti-Kolomoisky banking law, that prevents the state returning banks to their previous owner if they have been nationalised, has highlighted the deeply corrupt nature of Ukraine’s politics and how its reform agenda is in constant danger of being hijacked by the vested interests in the Rada. Oligarch Ihor Kolomoisky has been fighting a running battle with the National Bank of Ukraine (NBU) to regain control of his PrivatBank, which the regulator nationalised in 2016.

“The Ukrainian state does not exist. Society is divided into groups and clans, managed by bureaucrats and their bosses. People are born as if embedded with 'chips' assigning them to a given group from birth,” Saakashvili said.

A string of deep reforms to the fiscal and financial system have been implemented over the last ten years that have paid dividends by cutting both graft and waste. One of the most obvious examples is the changes made to the tax system under Prime Minister Mikhail Mishustin, who was formerly the head of the tax service. He brought in a new IT system that has seen the tax take rise by 20% last year, despite only a 2% increase to the tax burden. At the same time, long running scams like “flight by night companies” that took on a tax liability only to go bankrupt the day the taxes were due have been stamped out.

In parallel since she took over in 2013, Central Bank of Russia (CBR) governor Elvira Nabiullina has steadily closed 100 banks a month and revamped the whole sector’s prudential rules and reporting. The resulting clean-up of the sector has seen the end of what were once dubbed “the bank-like institutions” that were either glorified treasury operations for big companies or money-laundering shoots to offshore havens.

And last year Russia adopted Basel III regulations, a much tougher set of banking regulations that were vigorously resisted by Russia’s top banks, as well as the new IFRS-9 standard of reporting. Nabuillina has been praised as the “world’s most conservative central banker” and some international observers from the international financial institutions (IFI) say Russia’s macro-policy is better run than that of the US Federal Reserve bank.

With the emphasis on regulation and simplification, a World Bank study from a few years ago found that Russia’s financial system regulation and administration was in the top ten in the world for efficiency, ahead of the US.

However, despite Russia’s good results with financial and fiscal sector reforms, it still has major problems in other areas where reforms have been less rapid or comprehensive.

Russian President Vladimir Putin set the government the task of getting into the top 20 in the World Bank’s Doing Business survey in 2012 when Russia was languishing at 117th place out of a total of 190 countries. Russia narrowly missed meeting this goal by rising to an impressive 28th place in the last ranking in 2019.

Russia has been held back by poor progress in several of the subcategories that go into making up the index.

Russia made progress in dealing with construction permits, and increased quality control for construction through quality-based inspections, which are two of the subcategories, and aspects of the ranking that Russia is particularly bad at.

Getting electricity also became both cheaper and easier, paying taxes less costly due to higher depreciation rates for fixed assets, while online customs clearances improved trading across borders. All of these reforms apply both to Moscow and St Petersburg.

By contrast, Ukraine climbed five places in the 2019 ranking to 71st place, according to the last report released in October 2018.

Experts say there are a lot of problems with the World Bank’s survey, which should only be taken as indicative of change and not an actual assessment of how easy it is to do business. But the contrast Saakashvili was highlighting in the amount of progress made by Ukraine’s reform in relation to Russia’s is clear from the survey’s results.