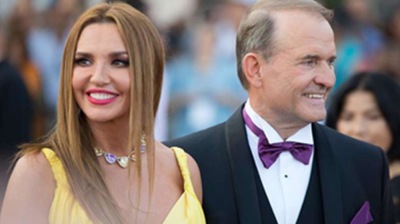 Oksana Marchenko, wife of Ukrainian opposition politician Viktor Medvedchuk, has launched her political career after her husband was sanctioned by the Zelenskiy administration.
By bne IntelliNews February 23, 2021

In an echo of Belarusian politics, Oksana Marchenko, the wife of the sanctioned Ukrainian Rada leader of the pro-Russian Opposition Platform – For Life Viktor Medvedchuk, says she will go into politics for "the protection of the Ukrainian people,” Interfax Ukraine reported on February 22.

"Until yesterday I was the wife and the mother of his [Medvedchuk's] children. But you forced me to take the political weapon in order to stand beside my husband and work towards our common goal as a single front. Now you're getting not only Medvedchuk, but also Marchenko, although I did not aspire to go into politics. You left me no choice. Today, I'm joining the Opposition Platform - For Life party, where I see the protection of the Ukrainian people as my main task," Marchenko said in a video address published on her YouTube channel.

At the same time, she described her and her husband Medvedchuk as "law-abiding citizens" and "the future of Ukraine."

Medvedchuk has attempted to hit back by launching an impeachment process in the Rada against Zelenskiy, but as the Opposition Platform For Life does not have enough votes the initiative is expected to fail.

Ukrainian President Volodymyr Zelenskiy has launched an attack on his political opponents with a series of sanctions that have frozen some of their assets and closed down their media channels.

The government imposed sanctions on the media assets of Medvedchuk earlier this month. Medvedchuk was an eminence grise in the Ukrainian government as the head of the presidential administration under the second president, Leonid Kuchma, and is also a personal friend of Russian President Vladimir Putin. As bne IntelliNews reported, he also is a business partner of oligarch Ihor Kolomoisky, owning a quarter of Kolomoisky’s media empire.

Zelenskiy accused Medvedchuk of being backed by the Russian government in July last year and Medvedchuk meets regularly with Putin in Moscow.

Zelenskiy's campaign against his political opposition and the oligarchs is partly inspired by his falling popularity and that of his party at the polls, after he has largely failed to deliver on campaign promises to end corruption.

It is also an attempt to deal with “The Oligarch Problem” that is plaguing most of the countries of the Former Soviet Union (FSU).

Recently Ukraine’s prosecutor-general also launched an investigation into the former managers of PrivatBank, who are accused of looting the bank and leaving it with a $5bn hole in its balance sheet that led to its nationalisation in 2016 that followed a bne IntelliNews investigation “Privat investigations” that exposed a network of fraudulent related party lending. The former head of the bank was prevented from leaving the country this week on a private jet by the general prosecutor.

And there is an attempt to eject Kolomoisky from the structures within the national gas company Naftogaz; acting Energy Minister, and one of the few honest reformers left in Ukraine’s government, Yuriy Vitrenko sent a letter on February 12 to PM Denys Shmyhal suggesting the replacement of the supervisory board and top management of Naftogaz to isolate its subsidiary Ukrnafta, in which Kolomoisky is a major shareholder.

Marchenko is the ultimate beneficiary of Bolvik Ventures Ltd, an offshore company in the British Virgin Islands, which holds a 10% minority stake in the Kolomoisky’s 1+1 TV channel (TOV Teleradiocompaniya Studio 1+1), InformNapalm reports.

She is also the registered owner of the natural gas producing company on the Crimean shelf seized by Russia, as well as many large companies that were previously known as controlled by Kolomoisky and his Privat Group that received new shareholders in 2020 via Cyprus offshore companies beneficially owned by Marchenko.

According to the Ukrainian constitution, only citizens that have participated in acts of terrorism can be sanctioned.  The National Security and Defence Council’s decision to impose sanctions on Medvedchuk and his wife is based on documents and videos provided by the SBU that “testify to the illegal terrorist activities of these persons,” NSDC Secretary Oleksiy Danilov said in comments as cited by Interfax Ukraine.

"I will not reveal a big secret, and this is open information: that as far as 14 kilometres from our border, on the territory of the Russian Federation, there is one of the oil refineries owned by Medvedchuk together with his wife, and by [Medvedchuk’s business partner Taras] Kozak, also together with his wife. And supplies of oil materials are carried out to the territory of terrorists who kill our fighters. Therefore, there is nothing surprising. We have enough evidence that it is a terrorist group that deliberately finances and helps Russia-led forces," said Danilov in a televised interview.