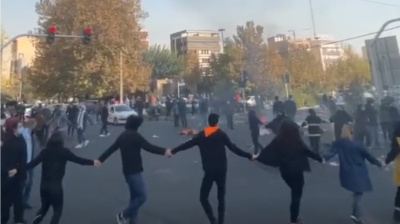 Video recordings posted on social media showed panicked passengers running towards exits, after police began shooting on a crowded platform. Some police officers were filmed through train windows going through carriages and striking women with batons.

The shocking scenes came as Iran’s anti-regime protests entered a third month, with some support shown by shopkeepers and businesses responding to a call for strikes. The unrest was sparked in mid-September when 22-year-old Mahsa Amini collapsed and died in the custody of Tehran “morality” police who detained her on a street for an alleged loose wearing of a hijab, or headscarf, that breached of Iran’s Islamic dress code for women.

There was an intensification of demonstrations on November 16, when a call went out for three days of action to commemorate “Bloody November” of 2019, when possibly more than 1,500 were killed during a crackdown against protests triggered by a sudden hike in fuel prices.

AFP reported that six people died around Iran in overnight clashes. Since the unrest began, around 350 protesters have lost their lives, according to human rights groups. Oslo-based group Iran Human Rights (IHR). says 15,000 people have been arrested, a figure the Iranian authorities deny.

So far, five protesters have been sentenced to death.

“We fear mass executions, unless the political cost of executions increases significantly,” said Mahmood Amiry-Moghaddam, director of IHR. “The international community must send a strong warning to the Islamic republic that execution of protesters will have severe consequences.”

In another development, Iranian state media reported on November 16 that at least five people, including two members of Iran’s volunteer Basij militia, were killed in what was described as a terrorist attack at a market in the city of Izeh in the south-western province of Khuzestan, where most of Iran’s ethnic Arab minority live.

The Tehran regime accuses foes including Saudi Arabia, Israel and the US of having fomented much of the unrest. It has taken particular aim at London-based Farsi-language satellite TV media outlets it says are funded by the Saudis.

On November 16, the head of British intelligence agency MI5, Ken McCallum, said in his annual update on threats facing the UK that there have been at least 10 potential threats by Iran to kidnap or kill British or UK-based people this year.

Iran projected threats "directly" in the UK through its "aggressive intelligence services", he warned. This included ambitions to kidnap or even kill British or UK-based people seen as enemies of the regime, he said.

Last week it emerged that Iranian journalists based in the UK had received police warnings on potential risks to their lives.

In a move against Iranian state media, the US on November 16 announced it has sanctioned six senior employees of Islamic Republic of Iran Broadcasting (IRIB), which it accused of being a "critical tool" in Iran's suppression and censorship of its people. The US Treasury Department said IRIB has broadcast hundreds of forced confessions of detainees.

Support for the protesters continues to come from the Iranian sports world. Iranian football legend Ali Daei has announced that he will not travel to Qatar for the 2022 FIFA World Cup, set to start this weekend, in solidarity with those participating in the anti-government protests.