Senator probes whether Trump has intervened to assist Turkey’s Halkbank 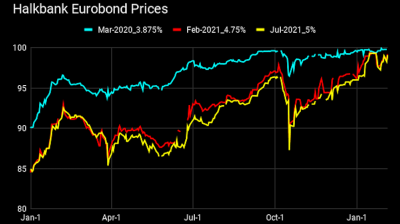 An American senator has written to US Attorney General William Barr to query whether Donald Trump has tried to intervene on behalf of Turkish state lender Halkbank—the senator, Democrat Ron Wyden, disclosed his move after on February 3 a US appeals court agreed to pause a case alleging that the bank evaded US sanctions on Iran.

Wyden wrote that he was concerned that the Trump administration’s “interference in favor of Turkey’s Halkbank requests could have undermined years of effort by U.S. law enforcement”.

Shares in Halkbank were up 7.41% by 16:00 Istanbul time on February 4 as news spread that a three-judge appeals court panel has agreed to consider on an expedited basis the bank’s request to have the indictment dropped. US District Judge Richard Berman sitting in the Southern District of New York (SDNY) had rejected the request, prompting the appeal. On January 21, SDNY federal prosecutors demanded that Halkbank pay millions of dollars in fines for its ongoing obstinate failure to respond to the indictment. They asked Berman to impose a daily $1mn fine for contempt of court that would double each week the bank refused to appear in the case. The requested fine would total $7mn after the first week of non-compliance and $21mn after two weeks, and nearly $1.8bn by the end of eight weeks.

The Democrats are concerned by the close relationship between Trump and Turkish strongman Recep Tayyip Erdogan, especially as the US president has business interests in Turkey, including office and residential complex Trump Towers Istanbul. A handful of US publications have written that there are stark allegations that need investigating but that such is the exhaustion caused by other alleged scandals, such as those looked at by the Trump impeachment trial and the Mueller investigation, that the media, public and politicians have let matters slide.

There is consternation among many congressmen that Trump persistently avoids hitting Turkey with meaningful sanctions, despite actions by Ankara such as its October invasion of Syria and purchase of advanced Russian missile systems that threaten the security of Nato military hardware. Senator Wyden has asked Attorney General Barr to detail his interactions with Trump, Erdogan and Turkish Finance Minister and Erdogan son-in-law Berat Albayrak.

Wyden also expressed concern at Trump’s relationship with Erdogan in October when US Vice President Mike Pence said the Turks had been told the Halkbank case was a matter for the US judiciary. Erdogan—who has strenuously denied having any knowledge of the sanctions evasion conspiracy alleged by US prosecutors despite being implicated in a previous case in the affair brought by New York investigators in which a former Halkbank senior executive was convicted and jailed—tried unsuccessfully to have Barack Obama intervene against the prosecution and has been lobbying Trump to get the investigation dropped. He has claimed it has only come about because of conspiratorial moves made in the US by self-exiled “Gulenist” opponents of his rule.

Charges mirror those against Atilla

US prosecutors claim that from 2012 to 2016 Halkbank executives used money servicers and front companies in Iran, Turkey and the United Arab Emirates to evade US sanctions on Tehran. The charges, brought in October, mirror those against former Halkbank executive Mehmet Hakan Atilla. He was arrested in New York in 2017 and sentenced to 32 months in prison after a trial in the same court. Late last year, in a clear snub to US prosecutors, Atilla was made head of the Istanbul stock exchange.

Prosecutors say Halkbank undertook transactions on Iran’s behalf including allowing substantial amounts of $20bn in revenue in accounts from oil and gas sales to be spent on gold, and facilitating sham purchases of food and medicine.

Halkbank’s lawyers have said that the bank’s “incidental contacts” with the US are insufficient to establish jurisdiction in the New York federal court, Reuters reported. The bank, described by prosecutors as a “fugitive” from justice denies having taken part in the alleged conspiracy.

Why fintech IPO sensation Kaspi is king in Kazakhstan