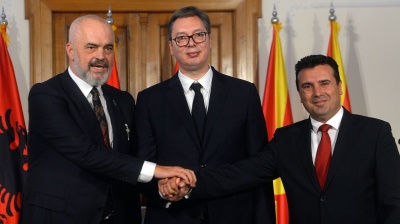 The leaders of Serbia, Albania and North Macedonia signed a declaration on the establishment of a Schengen-style area on October 10, Serbia’s President Aleksandar Vucic said in a statement.

Plans to set up a “Balkan Schengen” were announced at the end of September upon Vucic’s initiative.

“We agreed after tense work on the essence. This meeting is of exceptional importance for our three countries. The document that was signed is based on four key freedoms, which are represented in the EU, and they are flow of goods, capitals, services and people,” Vucic said.

He added that the three countries have set as a goal to make it possible to cross each other’s borders only with ID cards by the end of 2021. The agreement should bring benefits not only to citizens but also to companies.

"What has been agreed has a great benefit for the people of our three countries, because we are certain that our citizens deserve a better future, higher living standard, incomparably lower unemployment rate," Vucic said.

North Macedonia’s Prime Minister Zoran Zaev said that the initiative would strengthen the region and make the relations between the countries more simple, stable and peaceful.

He also called on the rest of the Western Balkan states – Bosnia & Herzegovina, Kosovo and Montenegro – to join the initiative.

"We have a lot of potential that we could use, and we shall also gain more respect from the EU," Zaev said.

He added that the Western Balkan states should work more intensively and not be satisfied with what has already been achieved.

In November, the leaders of the three countries will meet in North Macedonia to define specific steps and sign agreements.

Vucic has been pushing for some time for a Western Balkans common market, which would see the removal of barriers to cross-border trade within the region. He first proposed the idea of a regional economic area in February 2017 when he was Serbia’s prime minister. At the time he stressed that the richer all countries in the region are “the better it will be for us”.

This would benefit local exporters and importers would encourage FDI — Vucic claimed in 2018 this would double the current level of FDI and bring in at least $8bn-9bn of investments a year.

However, while the concept has support from some top EU officials, there is less enthusiasm within the region, where politicians have set their sights on EU accession rather than deeper integration with their neighbours.

It’s also at the mercy of complex regional politics, and looks like an even further off prospect since Kosovo slapped 100% import tariffs on goods from Serbia and Bosnia in a politically motivated move in late 2018. Despite external pressure, the tariffs remain in place with a damaging impact on trade.

Outrage in Tirana over dawn demolition of historic theatre

Foot traffic at Russia’s leading malls jumps as rebound gets underway
12 hours ago
Armenia’s coronavirus plight worsens with more than 1,000 more infections in two days
22 hours ago
Authorities “may be sowing seeds of Turkish economy’s downfall” by pumping money at fastest rate for more than decade
1 day ago
Turkey’s electricity consumption collapses 17% in May
2 days ago
Russian government presents National Recovery Plan to President Putin
2 days ago