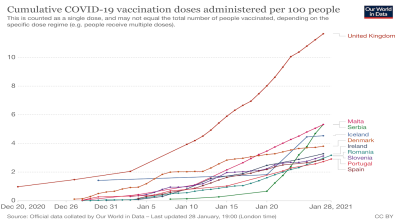 As of January 27, Serbia had vaccinated 5.3 citizens per hundred, second only to the UK and on a par with Malta, according to figures compiled by Our World in Data. / Our World in Data
By bne IntelliNews January 29, 2021

While its neighbours in the Western Balkans have struggled to secure vaccines at all — so far only Albania has managed to start vaccinating its population — Serbia has embarked on one of the fastest vaccine rollouts in Europe.

Serbia has so far agreed to purchase about 6.5mn vaccines against coronavirus (COVID-19), President Aleksandar Vucic stated on January 28.

As of January 27, Serbia had vaccinated 5.3 citizens per hundred, second only to the UK and on a par with Malta, while the average in Europe was 2.68, according to figures compiled by Our World in Data.

Serbia has responded by buying up vaccines from several different sources — the Pfizer-BioNTech vaccine and Russia’s Sputnik V as well as vaccines from China.

Vucic confirmed the announcements by Prime Minister Ana Brnabic that a total of 40,000 Sputnik V vaccines from Russia will arrive in Serbia soon, and said the two countries would have new talks in which Serbia would try to procure new doses of vaccines.

One million doses of coronavirus vaccine from China arrived in Serbia earlier. There are also announcements of the start of production of the Russian vaccine in Serbia.

Serbian ambassador to Russia Miroslav Lazanski says that a delegation from Russia is supposed to arrive at the Torlak Institute in Serbia by the end of the current week or at the beginning of next week, in order to examine the staff and technical capacities of the institute and whether it is able to produce the Sputnik V vaccine, reported Tanjug.

Russia’s gross international reserves (GIR) held by the Central Bank of Russia (CBR) have fallen from $629.4bn on February 25 to $585.7bn as of May 13, a fall of $43.7bn according to the latest data released by the regulator.

The industrial price inflation in April was the second-highest since last November when Gazprom began charging much higher prices under a new contract.

The volume of construction works in Romania increased by 6.5% y/y in the first quarter of 2022.

Trust in TV news is declining among Russians, as social media news gains popularity. At the same time, Russian support for the war in Ukraine appears to be slipping, as does the belief that Russia is winning a global power struggle.