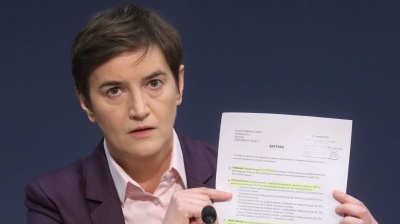 The planned mine had become highly controversial in Serbia, where it has sparked a series of mass protests and road blockades in recent weeks. As the April general and presidential elections approach, the government — which had previously promised a referendum on the project — decided to scrap its licences.

Speaking after a government session, Brnabic said ministers had revoked the decree and spatial plan of the special purpose area for the project. Brnabic told journalists that the spatial plan for Jadar “no longer exists”, and added that all administrative acts related to Rio Tinto including all permits, resolutions and decisions have been annulled, a government statement said.

“Thus, we have fulfilled all the demands of environmental protests and put an end to Rio Tinto in Serbia. With this, as far as the Jadar project and Rio Tinto are concerned, everything is over,” Brnabic commented.

Lithium is in growing demand as it is used in batteries for electric vehicles (EVs) as well as smartphones and other electronic products. Rio Tinto previously announced that the Jadar project would enable it to become Europe’s biggest supplier of lithium for at least 15 years.

Demonstrating its confidence in future demand for the metal that has been dubbed ‘white gold’, in December Rio Tinto announced it had agreed to buy the Rincon lithium project in Argentina in a $825mn deal.

Belgrade’s decision caused Rio Tinto’s share price to fall by 5.1% on Australia’s ASX exchange on January 20, before reviving slightly to end the day 4.1% down.

The company’s share price also dropped on the London Stock Exchange this morning, falling by -2.31% as of 10.15am local time.

Earlier this week, Rio Tinto announced alongside its 4Q21 results that it was pushing back the expected date of the first saleable production at the project.

“At the Jadar lithium-borate project in Serbia, as a result of delays in the approval of the Exploitation Field Licence (EFL), which is a prerequisite to publish the Environmental Impact Assessment (EIA) and commence the consultation process, we are revising development timelines. Based on current estimates and subject to receiving all relevant approvals, permits and licences, first saleable production is expected to be no earlier than 2027 (previously 2026),” said the statement published on Rio Tinto’s website on January 18.

In November and December thousands of people gathered at protests and blocked roads across Serbia in protest against the project. Initiated by environmental groups and local residents in and around Loznica, where the mine was to have been built, they were also joined by opposition politicians. Protesters said they feared the mine would pollute farmland and water in the area.

Rio Tinto has argued the project will be in line with the highest environmental standards.

Back in December, President Aleksandar Vucic responded quickly to protesters’ demands, sending the controversial Law on Expropriation back to the parliament, after which the government immediately decided to withdraw it from parliamentary procedures. However, the protests continued into January.

The decision to revoke the licences for Rio Tinto, which has headquarters in London and Melbourne, follows swiftly on the international scandal surrounding Serbian tennis star Novak Djokovic’s deportation from Australia. On January 10 activists from the Ne Damo Jadar (We Don't Give Jadar) association gathered outside Rio Tinto’s information centre in Loznica and pelted the building with eggs to express their unhappiness with Djokovic’s treatment by the Australian authorities.

Belarus expands its use of the death penalty
8 hours ago
The Mariupol siege is over as the last Azov defenders surrender
19 hours ago
Kyrgyzstan: Eccentric health minister fights for his job amid claims of corruption and bullying
1 day ago
Azov commanders have remained behind in the Mariupol steelworks to continue the fight
1 day ago
Russia hopes Chinese carmakers will help revive Moskvitch brand
1 day ago