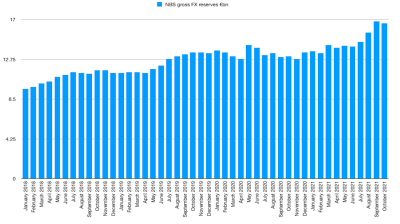 Serbia’s gross NBS FX reserves amounted to €16.3bn at end-October, covering 145% of money supply (M1) and more than six months' worth of the country's import of goods and services, which is twice the level prescribed by the adequacy standard, the National Bank of Serbia (NBS) announced.

The October decline in FX reserves is attributable primarily to government net debt repayment in respect of FX loans and other FX liabilities (€317.8mn in total), followed by NBS activity aimed at maintaining relative stability in the local FX market (net outflow of €115.0mn), and usual activity of banks regarding FX reserve requirements (net outflow of €99.9mn).

October trading volumes in the IFEM (Interbank Foreign Exchange Market) amounted to €593.6mn, up by €15.9mn on the month before. In the ten months of 2021, interbank trading volumes reached a total of €5,296.0mn, the NBS said in the statement.

In October, as in the year so far, the value of the dinar vis-à-vis the euro remained almost unchanged. The NBS sold €140.0mn net in the IFEM during the month. Since the start of the year, the NBS bought €950.0mn net in order to maintain relative stability of the exchange rate.